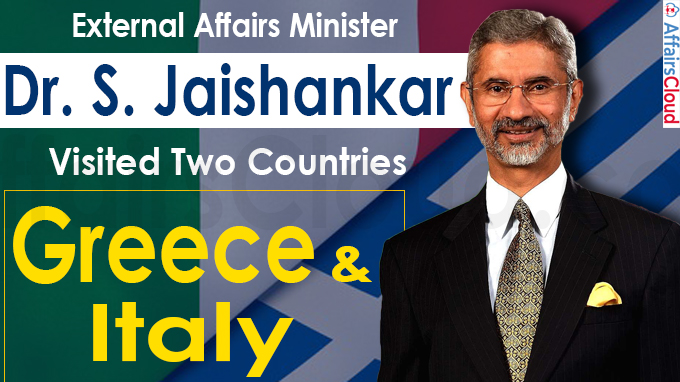 EAM Jaishankar visited Greece at the invitation of Minister of Foreign Affairs of the Hellenic Republic (Greece),  Nikos Dendias.  During the visit, he also held talks with Prime Minister of Greece, Kyriakos Mitsotakis.

During the visit, Greek Foreign Minister Nikos Dendias signed and handed over the Agreement on the International Solar Alliance (ISA) to the Indian side.

ii.It aims to work for efficient consumption of solar energy for reducing dependence on fossil fuels & contribute to the implementation of the Paris  Climate Agreement through the massive deployment of solar energy.

Key Takeaways from the visit

i.EAM Jaishankar unveiled the statue of Mahatma Gandhi in Athens.

ii.The 2 countries agreed to work towards the establishment of a Strategic Partnership. They are also expected to sign the Cultural Exchange Programme for the period 2021-25 in the future.

ii.During the meeting, the ministers held discussions on how to improve cooperation and revive the world’s economy in the post-pandemic era. They also discussed ways to boost sustainable development in Africa.