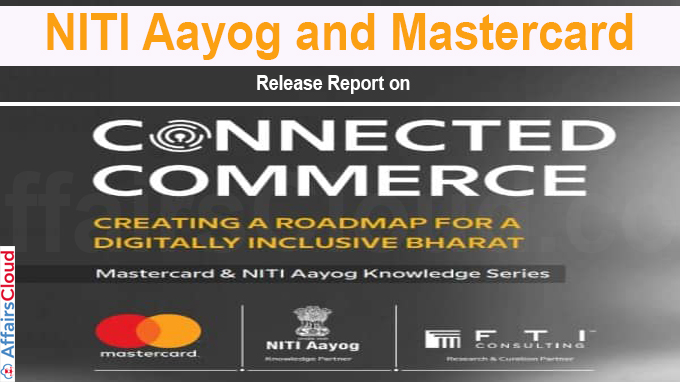 NITI Aayog (National Institution for Transforming India) & Mastercard released a report titled ‘Connected Commerce: Creating a Roadmap for a Digitally Inclusive Bharat’. FTI Consulting was the Research and Curation Partner of the report.

Key Recommendations of the report

iii.To create an information-sharing system, including a ‘fraud repository’, and making it necessary for all e-commerce platforms to carry warnings to alert consumers about the risk of frauds.

The recommendations are the result of five roundtable discussions  (knowledge series) held between October & November 2020 between Government experts, the banking sector, the financial regulator, fintech enterprises and other ecosystem innovators.

i.The discussions were led by NITI Aayog and supported by Mastercard.

ii.The Key issues discussed during the five roundtable discussions (or knowledge series) were

Note – India was ranked 49th out of 120 countries in the ‘Inclusive Internet Index 2021’ released by Economist Intelligence Unit (EIU) in partnership with Facebook.

i.According to the report ‘Prime-Time for Real Time’-2021 launched by ACI Worldwide and GlobalData, India with 25.5 Billion transactions topped the list of countries with the most real-time transactions in Digital Payments in 2020. It was followed by China (15.7 Billion) & South Korea (6.0 Billion).