The KYC procedure is completed by the banks while opening accounts and also banks periodically update the same. It is alternatively known as know your client. Some countries call this as a customer identification program. 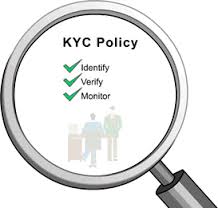 To open a bank account, one needs to submit a ‘proof of identity and proof of address’ together with a recent photograph.
Documents giving proof of identity are Passport, Driving Licence, Voter’s Identity Card, PAN Card, Aadhaar Card issued by UIDAI and NREGA Card which have been notified as ‘Officially Valid Documents’ by the government.
If the document also contains the address, it is valid as an address proof also, but if not then you need to provide another document as address proof.

What is the need of KYC by the banks?

It is a process by which banks obtain information about the identity and address of the customers. This process helps to ensure that bank’s services are not misused. It helps to stop money laundering.

e-KYC refers to electronic KYC. e-KYC is possible only for those who have Aadhaar numbers.

People can register for e-KYC on the basis of their Aadhar Numbers. After the e-KYC procedure is done, all information of the customer can electronically transfer to the banks. So in this case, there is no requirement of paper submission of proofs. So e-KYC process is permitted to be treated as an ‘Officially Valid Document’.

KYC formalities are required to be completed for all Unit Holders, including Guardians and Power of Attorney holders in order to comply with the regulatory provisions under the Prevention of Money Laundering Act 2002(Act of the Parliament of India enacted by the National Democratic Alliance government to prevent money-laundering and to provide for confiscation of property derived from money-laundering).