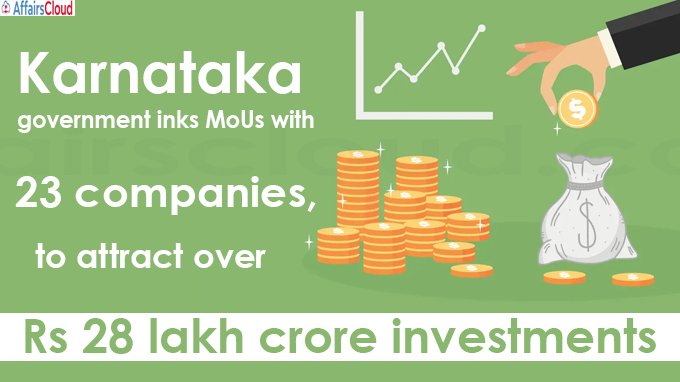 On July 15, 2021, during the ‘Invest Karnataka’ event the Karnataka government announced signing of Memorandums of Understanding (MoUs) with 23 companies covering sectors such as Electric Vehicles, data centres, aerospace and Defence to attract investments worth over Rs 28,000 crore and generate nearly 15,000 direct jobs.

i.Since March 2020, Karnataka Government has cleared more than 520 projects of industries with a total investment of Rs 77,000 crores in multiple sectors.

ii.Karnataka has developed dedicated clusters for Toys in Koppal, Consumer Electronics in Dharwad, Pharmaceuticals in Yadgir, among others.

iii.It should be noted that the Karnataka government has decided to host the Global Investors Meet (GIM) in its capital city Bengaluru from February 9 to 11 in 2022.

As a part of Indo-Israel Agricultural Project (IIAP), the Government of India (GoI) and the state Government of Karnataka jointly inaugurated three centres of excellence (CoEs) in Karnataka viz. COE Kolar for Mango, COE Bagalkote for Pomegranate and COE Dharwad for Vegetables.