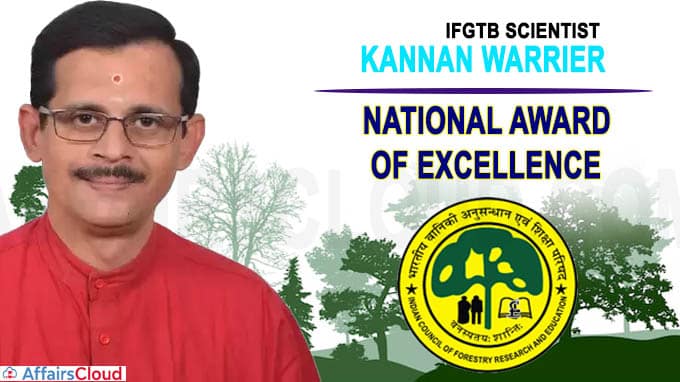 Kannan CS Warrier, Senior Principal Scientist (Scientist F) at the Institute of Forest Genetics and Tree Breeding (IFGTB) received the 2019 National Award of Excellence for Outstanding Research in Forestry from the Indian Council of Forestry Research and Education (ICFRE).

i.The National Award was given to Kannan CS Warrier for releasing three productive clones of Casuarina equisetifolia, first of its kind in India that are suitable for salt affected (sodic) soils.

ii.The clones developed by Kannan are expected to boost the agro forestry initiatives of ICFRE and offer a potential solution to the sea erosion in the coast of Kerala.

iii.Kannan collaborated with the Commonwealth Scientific and Industrial Research Organisation(CSIRO) Australia for infusing the germplasm of Casuarina equisetifolia, for broadening the genetic base of the species in India.

Around 15 species of Casuarina are found in the tropical and subtropical zones.

It is cultivated in many regions because of its adaptability to multiple environmental conditions.

It is used for biomass energy plantations for its nitrogen fixing ability as well as for its pulp and other industrial applications.

i.Kannan was the first rank holder in BSc and MSc Forestry at the Kerala Agricultural University.

For his research on endangering sacred groves (koyil kaadu in Tamil, orans in Rajasthan, devara kaadu in Karnataka, and sernas in Madhya Pradesh) of non-forested region in Kerala he won the Rolla S Rao National Award for the best research work in the field of biodiversity conservation in India, instituted by the Indian Association of Angiosperm Taxonomy.

About Indian Council of Forestry Research and Education (ICFRE):
Director General– Arun Singh Rawat(appointed after the repatriation of the previous DG SC Gairola to his parent cadre of Maharashtra on March 16, 2020)
Location–  Dehradun, Uttarakhand