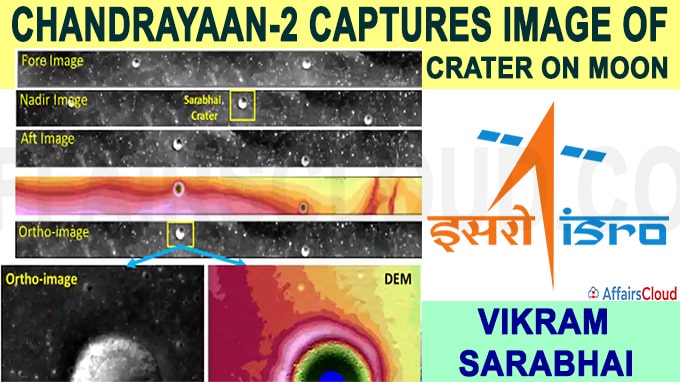 Indian Space Research Organisation (ISRO) announced that Chandrayaan-2 has captured images of Craters of the Moon by Terrain Mapping Camera – 2 (TMC-2) and named one of the craters as ‘Sarabhai Crater’ after Indian astrophysicist Dr. Vikram Ambalal Sarabhai who is regarded as the Father of Indian Space program so as to celebrate his birth centenary.

ii.Mare Serenitatis is one of the lunar mare regions on the Moon, with vast lava plains creating a near flat surface.

iii.Around 250 to 300 kilometres east of this Crater is the landing site of Apollo 17 and Luna 21 missions.

iv.As per the Digital Elevation Model (DEM) and 3D view of the crater generated using the Fore, Nadir and Aft images from TMC-2, the average depth of the crater is around  1.7 Kms taken from its raised rim and the slope of Crater walls is between 25 to 35 degree.

v.These findings will help the Space Scientists to understand further the process on the lunar region filled with lava.

He is the founder of the Physical Research Laboratory and a distinguished cosmic-ray and space scientist. He is also credited with establishing ISRO.

i.As per the design, Chandrayaan-2 will continue to perform and provide valuable scientific data

ii.In October 2020 the public release of scientific data from Chandrayaan-2 for global use will begin.

Note- Chandrayaan-2, planned to land on the South Pole of the Moon was  launched on July 22, 2019. But the Vikram lander crashed on September 7, 2019 which crashed India’s dream to become the first nation to successfully land on the lunar surface in its maiden attempt.

ii.China National Space Administration (CNSA) has named its first Mars exploration mission as “Tainwen-1” and also released its logo “Lanxingjiutian” during the online celebration of “Space Day” which marks the 50th anniversary of the launch of the country’s first satellite Dong Fang Hong-1 in 1970.