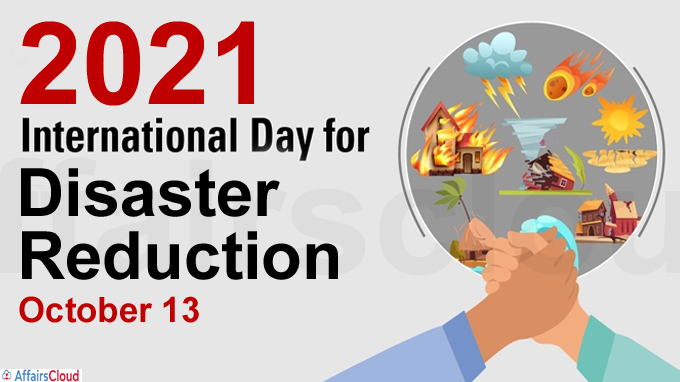 The United Nations(UN)’s International Day for Disaster Risk Reduction (IDDRR) is annually observed across the globe on October 13th to promote the culture of risk awareness and disaster reduction and to recognise the progress towards reducing disaster risk and loss of lives, livelihoods and health.

IDDRR 2021 focuses on ‘International cooperation for developing countries to reduce their disaster risk and disaster losses’. This is the 6th target of the Sendai Seven targets.

ii.Following this UNGA adopted the resolution A/RES/64/200 on 21st December 2009 and proclaimed the 13th October of every year as the International Day for Disaster Reduction.

i.The allocations for emergency response are around 20 times higher than the allocation for prevention and preparedness, countering sustainable principles.

ii.The Sendai Framework for Disaster Risk Reduction 2015 – 2030, emphasized cities, which are the front lines in dealing with disasters.

i.India is one of the world’s most disaster-prone countries.

ii.27 out of 29 states and seven union territories in India are exposed to recurrent natural hazards like cyclones, earthquakes, landslides, floods and droughts.

Centre of Excellence for Climate and Disaster Resilience:

i.As a part of the IDDRR 2021, the World Meteorological Organization(WMO) and the UNDRR has announced the creation of the Centre of Excellence for Climate and Disaster Resilience.

ii.This will act as an information hub about the escalating impacts of climate change and extreme weather and how to manage and control these risks.