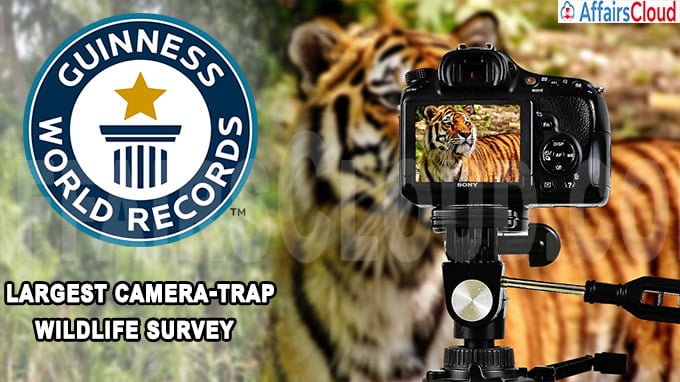 4th edition of India’s 2018 Tiger census sets new Guinness World Record for being largest camera trap wildlife survey because the census had installed more cameras to monitor the tigers as compared to other countries. As per the census, In 2018, India had doubled the tiger population before 4 years of the target year, 2022 through the Sankalp Se Siddhi programme.

Conducting Authority – The All India Tiger Estimation survey was conducted every four years is guided by the National Tigers Conservation Authority with the technical support of Wildlife Institute of India implemented by the State Forest Departments.

ii.According to the latest survey conducted in 2018 it is estimated that India has around 2967 tigers out of which the survey captured the individual photos of 2461 tigers, as of now 75 per cent of the global tiger population are in India.

iii.The cameras captured around 3,48,58,623 photographs of the wildlife which includes 76,651 images of tigers and 51,777 of leopards and the remaining were the images of other native animals.

i.The website of Guinness Book of World record cited that the fourth iteration of the survey conducted in 2018-2019 was the most comprehensive to date in terms of resources and data.

ii.More than 1492 tigers are found in the forest areas of Madhya Pradesh, Karnataka and Uttarakhand.