The Indian Men’s cricket team won the 3 match Paytm T20I (twenty-twenty International) series against Bangladesh in India for 2-1 held from November 3-10, 2019 in New Delhi, Rajkot (Gujarat) and in Nagpur(Maharashtra). This is India’s first T20 series win at homeland in 2019. The T20I was a part of Bangladesh tour of India 2019-20, which also consists of two test matches, to be held from November 14-26, 2019. 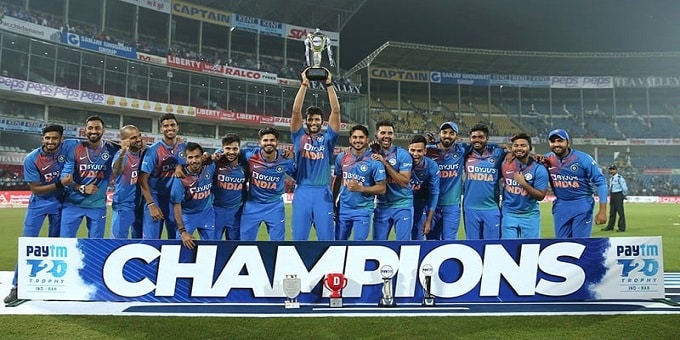 Records Broken:
Rohit Sharma records:
i.Breaks Dhoni’s record for most 6s in T20I: Indian cricketer Rohit Sharma broke the record of Mahendra Singh Dhoni for most sixes by an Indian captain in T20I cricket. He went past Dhoni with 37 sixes in 17 innings, while Dhoni holds the record of 34 sixes in 62 innings. Virat Kohli stands third in the list with 26 sixes in 26 innings.

iii.Holds most international sixes: Rohit holds the record for most of sixes in international cricket in 2019. He tops the list with 66 sixes currently.

Records by Chahar:
i.1st Indian to take T20I hat-trick: Indian Pacer Deepak Chahar took a sensational six-wicket haul, which included a hat-trick. By this he became the first Indian to take hat-trick in the shortest format.

ii.Records best ever figures in T20I: He broke the record of Srilankan skipper Ajantha Mendis for holding best ever figures where Chahar holds 6 for 7 runs in 3.2 overs. Ajantha’s record was 6 for 8 against Zimbabwe in 2012.

Record by Chahal:
i.Becomes fastest Indian to take 50 T20I wickets: India spinner Yuzvendra Chahal surpassed Jasprit Bumrah to become the fastest Indian bowler to take 50 T20I wickets. This achievement was done by Chahal in just 34 T20I appearances where Bumrah achieved the feat in 41 matches. Ravichandran Ashwin is the only other Indian to have achieved the feat in just 42 matches.