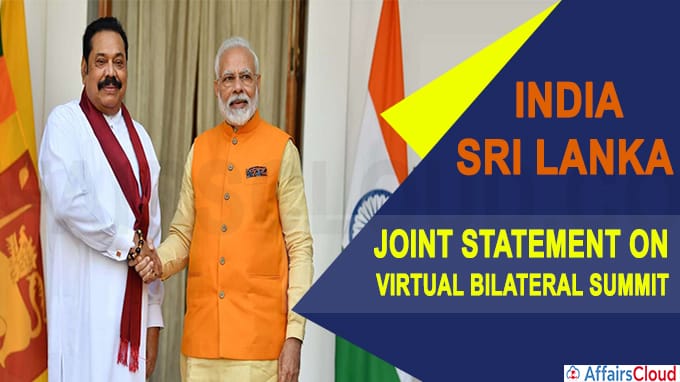 i.They agreed to increase cooperation to combat terrorism and drug trafficking. They also decided to extend the cooperation in Intelligence, Information Sharing, de-radicalization and capacity building.

ii.The two countries agreed to work together to complete construction of 10, 000 housing units in plantation areas announced by PM Modi during his visit to Sri Lanka in 2017.

iii.Strengthening of technical cooperation in areas of agriculture, animal husbandry, science & technology, health care and AYUSH (Ayurveda, Unani, Siddha and Homeopathy). Increased emphasis on Skill Development to realize the full potential of both the countries.

The Both sides also resolved to deepen cooperation in the renewable energy sector, with Special focus on Solar Projects under the US $ 100 Million Line of Credit from India.

The sides also discussed the establishment of an Air Bubble to resume travel between the two countries.

i.Strengthening of people-to-people ties by exploring opportunities in areas of common heritage such as Buddhism, Ayurveda and Yoga.

ii.Emphasis on early completion of infrastructure and connectivity projects in sectors of Ports and Energy as per Bilateral agreements and Memorandum of Understanding (MoU).

iii.The Government of India agreed to facilitate the visit of a Delegation Buddhish pilgrims from Sri Lanka in the Inaugural International Flight to the city of Kushinagar(Recently announced as International Airport due to its significance in Buddhism).

iv.Efforts to increase the engagement under the MoU for implementation of High Impact Community Development Projects (HICDP) for the period 2020-2025.

i.The two sides also agreed to address the issues related to fishermen through regular consultation according to existing frameworks and goals including the United Nations Sustainable Development Goals.

India extends US$ 15 Million for promotion of Buddhist Ties:

i.PM Modi also announced a grant assistance of US$ 15 million (approximately Rs.110 crores) for the promotion of Buddhist ties between the two countries.

ii.India, Srilanka recognized BIMSTEC as a major platform for linking South Asia and SouthEast Asia and agreed to work for a successful BIMSTEC Summit, which is to be hosted under the Chairmanship of Sri Lanka.

i.Indian Prime Minister Narendra Modi highlighted the SAGAR (Security and Growth for All in the Region) Doctrine, and Neighbourhood First Policy under which Sri Lanka has been given priority.

ii.SAGAR is India’s Policy or doctrine of Maritime Cooperation in the Indian Ocean Region, it was unveiled in March, 2015.