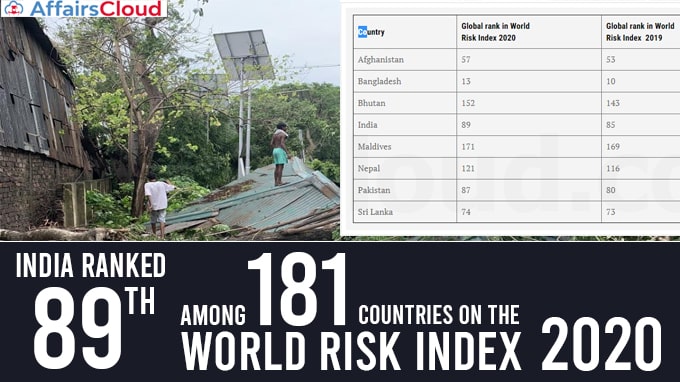 According to the World Risk Index (WRI) 2020, India has been ranked at the 89th spot among 181 Countries. The World Risk Index is a statistical model for the assessment of global risk of disasters such as earthquakes, storms, floods, droughts and sea-level rise.

i.WRI is part of the World Risk Report 2020 with special focus on “Forced Displacement and Migration” released by the United Nations University Institute for Environment and Human Security (UNU-EHS) and Bündnis Entwicklung Hilft, in cooperation with the University of Stuttgart in Germany.

ii.WRI has been developed in cooperation with the United Nations University’s Institute for Environment and Human Security (UNUEHS) and calculated by International Law of Peace and Armed Conflict (IFHV)

iii.It has been published by Bündnis Entwicklung Hilft and the Institute for International Law of Peace and Armed Conflict (IFHV) of Ruhr University Bochum (RUB).

i.The WRI is calculated based on a country-by-country basis through multiplication of exposure to extreme natural events and vulnerability and 27 indicators.

ii.According to the report, the Global Hotspots are in Oceania, South East Asia, Central America, West and Central Africa.

iii.It also shows that the island states across all regions are facing very high risk due to high exposure to extreme natural events such as sea-level rise due to global warming.

iv.All the South Asian Countries have fared poorly in strengthening the abilities to prepare and adapt to extreme events.

i.India is behind Sri Lanka, Bhutan and Maldives in terms of abilities to cope with extreme disasters, lack of adaptive capacities and the preparedness to deal with extreme events.

i.On January 15, 2020 the World Economic Forum(WEF) released the 15th edition of the “Global Risk Report 2020: An Unsettled World”. This report is a part of WEF’s Global Risks initiative and presents the major risk the world is expected to face in the future.

ii.On 19th June 2020, India released its first national report on the state of the climate crisis titled “Assessment of climate change over the Indian region” prepared with the support of the Ministry of Earth Science(MoES) and edited by the scientists of the Indian Institute of Tropical Meteorology(IITM), Pune.