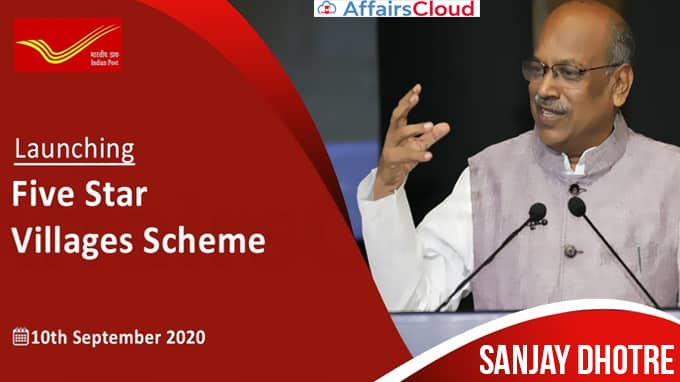 Postman and Postal Department are a vital part of the ordinary citizen’s life.India post is doing exceptional work in the implementation of Government schemes . Now, in order to ensure universal coverage of flagship postal schemes in rural areas, on September 10, 2020, Union Minister of State for Communications, Sanjay Shamrao Dhotre has launched a scheme namely “Five Star Villages” along with Department of Post.

The project is initially being launched in Maharashtra and based upon the progress of the scheme, it will be implemented across the country.

-The scheme will be implemented by a team of five Gramin Dak Sevaks who will be assigned a village for marketing of all products, savings and insurance schemes of the Department of Posts. This team will be headed by the Branch Post Master of the concerned Branch Office.  The teams will be led and monitored by concerned Divisional Head, Assistant Superintendents Posts and Inspector Posts. Monthly progress will be reviewed by the Chief PostMaster General.

-The team of Gramin Dak Sevaks will conduct a door-to-door awareness campaign on all schemes.

-Required training and infrastructure, would be provided to all branch offices in identified villages.

Implementation of scheme on pilot basis:

The entire state of Maharashtra will be covered under the scheme starting with, two rural districts / areas for each region: Akola and Washim in Nagpur Region; Parbhani and Hingoli in Aurangabad Region; Solapur and Pandharpur in Pune Region; Kolhapur and Sangli in Goa Region; and Malegaon and Palghar in Navi Mumbai Region. A total of 50 villages in each district will be covered during the current financial year 2020-2021.

On 12th May 2020, the Thiruvananthapuram division of Southern Railways and Kerala Circle of Postal department has initiated a first of its kind to establish tie up with the door delivery and pick up of parcels to help the public during the lockdown.