The first financial institution in the country to tie up with the BRICS Grouping. 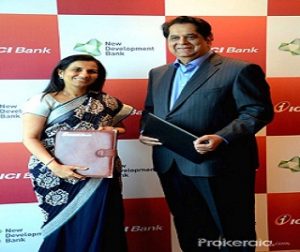 Agreement: To create a platform for sharing knowledge and deepening network connectivity between NDB and ICICI Bank after signing the MoU along with ICICI Bank chief Chanda Kochhar.

To support building of 2,370 mw of power capacity within the member ­countries. Out of his USD 250 million has come to state ­ run Canara Bank for on­ lending to renewable energy projects.