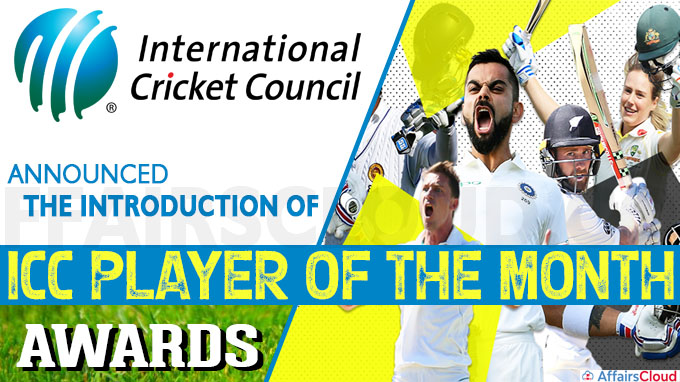 On January 27, 2021 The International Cricket Council (ICC) introduced the ICC Player of the Month awards for both male and female cricketers across all forms of international cricket.

Purpose of the Awards– To recognise and celebrate best performances throughout the year.

Every 2nd Monday of the month, the winners will be announced on the ICC’s digital channels.

On December 28, 2020 The winners of the International Cricket Council(ICC) Awards of the Decade(2011-2020) were announced. In this, Indian Cricketer Virat Kohli wins the Sir Garfield Sobers Award for ICC Male Cricketer of the Decade. He became the only men’s player to be named in ICC’s Test, ODI, and T20I Teams of the Decade.

Ellyse Perry(Australia) wins the Rachael Heyhoe-Flint Award for ICC Female Cricketer of the Decade. She is the first and only cricketer in history to complete the double of 1,000 runs and 100 wickets in T20I cricket.