Hello Aspirants, Welcome to Online English Section in AffairsCloud.com. We are starting IBPS Clerk course 2015 and we are creating sample questions in English language, type of which will be asked in IBPS Clerk Main Exam!!! 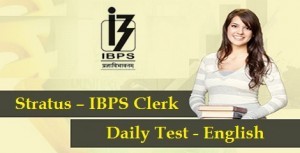 That secularism is a core value in the constitutional system has always been beyond debate, and its..(1)..as a principle of governance has been taken for..(2)…Whenever the subject was debated in independent India, it was in terms of questioning the balance between the rule of equality before law and the exception in the interest of..(3)..the rights of minorities. Mr. Rajnath Singh’s..(4)..that ‘secularism’ is the most misused word in Indian politics and that the time has come to end such misuse came close to questioning the continuing..(5)..of the very concept of secularism. It is indeed true that the..(6)..originally had no..(7)..to secularism, and that the word was introduced only in 1976. Yet, in terms of the..(8)..it gave to religious freedom, freedom of..(9).., equality and non-discrimination, the Constitution was indeed..(10)..with the secular spirit. The 42nd Amendment merely made it explicit.