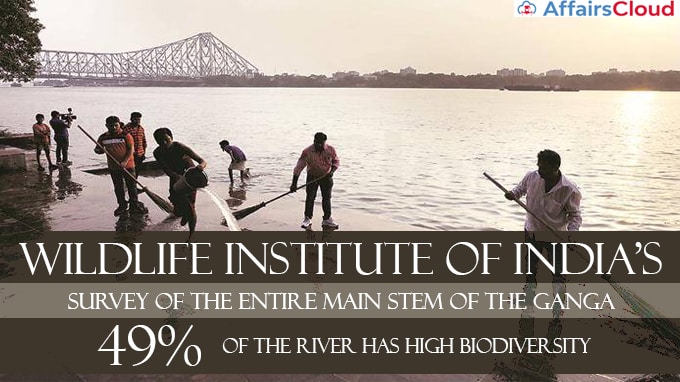 Wildlife Institute of India (WII) in the second phase of its survey of the entire main stem of Ganga river (Main river without its tributaries) found that 49% of the river has high biodiversity and increased biodiversity sightings. Scientists have stated that this indicated reduction of pollution levels and a healthier state of the river.

i.The study was initiated by WII on behalf of the National Mission for Clean Ganga.

ii.This is the first ever study done in India on the entire Ganga river, and first of all its biodiversity.

i.10% of high biodiversity areas fall alongside national parks and sanctuaries such as Rajaji National Park in Uttarakhand, Hastinapur Wildlife Sanctuary in Uttar Pradesh and Vikramshila Gangetic Dolphin Sanctuary, Bihar.

The high biodiversity stretches have been divided into six zones – Devprayag to Rishikesh (61 kms), Makdumpur to Narora (147 kms), Bhitaura to Ghazipur (454 kms), Chhapra to Kahalgaon (296 kms), Sahibganj to Rajmahal (34 kms) and Baharampur to Barrackpore (246 kms).

i.The Biodiversity was tracked through some key aquatic and semi-aquatic species such as Gangetic Dolphins, Gharials, Otters, Turtles and various species of water birds.

ii.Many other species of fish have started travelling back from tributaries to the main stem of the river which indicates improving water quality.

i.Loss of suitable habitat conditions was the major reason for reduction of biodiversity in the Ganga.

ii.Change in River’s morphology due to construction of dams and barrages, bank alteration, agriculture and sand mining posed threats to biodiversity in the river.

i.Ganga and its tributaries flows through 11 states and covers 26.3 % of the country’s Total Geographical area.

i.NMCG is the implementation wing of National Council for Rejuvenation, Protection and Management of River Ganga (referred as National Ganga Council).

About Wildlife Institute of India (WII):