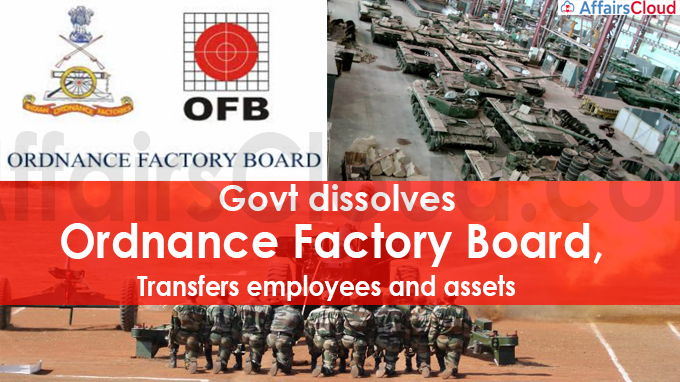 As part of the Atmanirbhar Bharat (self-reliant India) to corporatize the production in Defence sector, Defence Ministry of India had dissolved the Ordnance Factory Board (OFB).

i.As per the announcement issued by the Government of India on May 16,2020, the management, control, operations and maintenance of 41 production units and identified non-production units under OFB will be transferred to the wholly government owned seven defence PSUs (Public Sector Units) with effect from October 1,2021.

ii.The employees of OFB (Group A, B & C) who are working in production and non-production units will be moved to the new DPSUs on terms of foreign service without any deputation allowance (deemed deputation) initially for a period of two years.

iii.New DPSUs are required to frame rules and regulations related to service conditions of the dispersed employees and also a committee will be set up by DDP (Department of Defence Production) to guide new DPSUs in this regard.

About Ordnance Factory Board (OFB)