She was conferred with this award for her cookbook “4 o’clock Temptations of Kerala”. 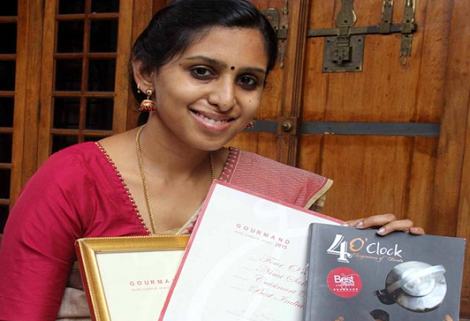 The cookbook is enriched with photos and details of 54 recipes from Kerala and each of these recipes are said to be specific to each district.

Nimi Sunilkumar has won award for the second time and earlier in 2013, her Lip-smacking Dishes of Kerala was selected third ‘Best Local Cuisine Book in the World’ category.

It is noted that the snacks include ‘unnakkayi’ (plantain rolls), ‘kumbilappam’ (steamed rice cones) to ‘kozhiyada’ (chicken pancakes) and ‘andiputtu’ (cashew and rice balls). The book, with 54 recipes, was exhibited at the Frankfurt World Book Fair in Germany in October 2015.

♦ It is famously known as the Oscar award in the field of cookery. This is the only international award in this particular field. The award is organized to honour the best food and wine books either printed or digital.