The advertisements for receipt of online applications for recruitment to the post of UDC, MTS and Steno were released by the different EMPLOYEES’ STATE INSURANCE CORPORATION (ESIC) Regions/Office in the month of December 2015.

The ONLINE EXAMINATION for the above said advertisements are scheduled from 18th March, 2016 to 26th March, 2016.
The written exam includes 4 sections – General Intelligence, Numerical Ability, General Awareness, and General English/English Language. There is a penalty of 1/4 for the wrong answer. 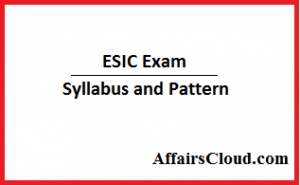 Number of questions and maximum marks in each section are described in the table below:

The Syllabus for the exam as provided by the ESIC: