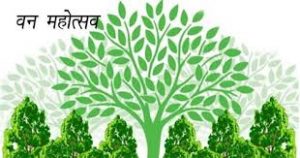 Van Mahotsav (Festival of trees)is an annual tree-planting movement in India, which began in 1950.