We are here for you to provide the important current affairs July 21 2018 which have unique updates of all daily events from all newspapers such as The Hindu, The Economic Times, PIB, Times of India, India Today, Indian Express, Business Standard, all Government official websites. Our complete current affairs helps you to get more marks in Banking, insurance, UPSC, SSC, CLAT, Railway and all other competitive Exams. 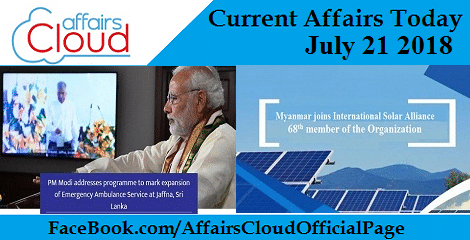 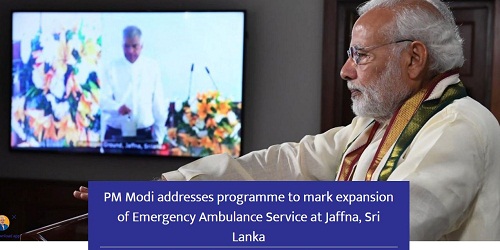 The inaugural function was scheduled in Jaffna, Srilanka in the presence of Sri Lankan Prime minister Ranil Wickremesinghe.
Key Points:
i. India has given a grant of 22.8 million US dollars – 7.6 million dolars in the first phase and 15.2 million dollars for the expansion of the project countrywide.
ii. In the first phase 88 ambulances have been purchased for two provinces and 209 ambulances for all districts in the country.
iii. This is the largest Indian grant project in Sri Lanka after Indian housing project.
iv. The grant covers training of manpower in India and meeting operational costs for one year.
India’s Contribution to Sri Lanka:
i. India’s contribution in Sri Lanka is nearly 2.9 billion US dollars, out of which 545 million US dollars is pure grants.
ii. The Indian Housing Project was a housing reconstruction project funded by the Government of India and implemented through an MoU with the Government of Sri Lanka (GOSL).
iii. It led to direct housing provision through the reconstruction and repair of 43,000 houses
iv. The 36 month project was implemented from mid-2012 until mid-2015.
Sri Lanka:
♦ Capital: Colombo and Sri Jayawardenepura Kotte.
♦ Prime Minister: Ranil Wickremesinghe.
♦ President: Maithripala Sirisena.
♦ Currency: Sri Lankan Rupee. 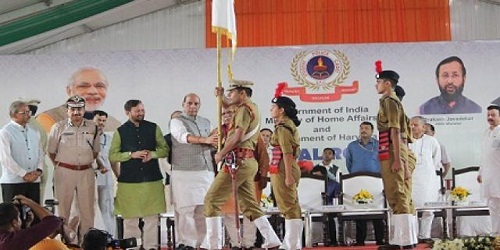 Objective:
To instill values and ethics to students through classes in schools and outside.
Key Points:
About the Programme:
i. Total cost of the programme is Rs.67 crore where each school will be handed Rs.50,000 for educational aids, training and contingency.
ii. The programme focuses on students of class 8 & 9.
iii. It covers two kinds of topic: Crime prevention and control and Values and ethics.
iv. Under Crime prevention and control key areas are: Community Policing, Road Safety, Fight against Social Evils, Safety of Women & Children, Fight against Corruption and Disaster Management.
v. Under Values and ethics the key areas are: Values & Ethics, Respect for Elders, Empathy & Sympathy, Tolerance, Patience, Attitude, Team Spirit and Discipline.
vi. A Handbook has been prepared by BPR&D for imparting instructions with the support of NCERT.
Implementation of the Programme:
i. There will be demonstrations through visits to: Women Police stations, Child Protection Homes including NGOs, Traffic Police and Fire Brigade Stations along with learning through group discussions, audio-visual mediums etc.
ii. In the State level , a state committee it will be headed by the Principal Secretary, Home Department with the Principal Secretary, Education and Director General of Police as members.
iii. In District Level, a similar committee will be led by District Magistrate with the District Inspector of Schools and Superintendent of Police as members.
iv. The Programme shall be at first implemented in Government schools in both urban and rural areas.
Headquarters of Organizations:

i. This contains 4200 years of history and climatic events suggesting a drought of 200 years that ruined civilizations from Egypt to China.
ii. These caused human migrations in Egypt, Syria, Palestine, Mesopotamia, Greece, Indus valley and Yangtze river valley.
iii. The reason is thought to be due to shifts in ocean and atmospheric circulation.
iv. The changes has been uncovered from a stalagmite from a cave in Meghalaya hence the period has been named on the region.
v. The Meghalayan Age is a part of a longer period known as Holocene Age that spanned over 11,700 years.
vi. The geological time has been divided into 3 parts: Meghalayan Age, Middle Holocene Northgrippian Age and Early Holocene Greenlandian Age.
strong>vii. These three new ages of Holocene Epoch are represented by sediments that accumulated worldwide on sea floor, on lake bottoms, as glacial ice and as calcite layers in stalactites and stalagmites.
International Union of Geological Science (IUGS):
♦ Headquarters: Beijing, China.
♦ Founded: 1961 in Paris, France.
♦ Parent Organization: International Council for Sciences.

WB govt & NHA sign MOU to implement Ayushman Bharat scheme
On July 21, 2018, West Bengal government signed an agreement to implement the Ayushman Bharat-National Health Protection Mission with the National Health Agency (NHA).
i. West Bengal health department principal secretary Anil Verma signed this agreement.
ii. According to this, the scheme would be implemented through a “mixed mode” of third-party insurance and state-run trust, Indu Bhushan.
iii. Also under this, the state government would expand the number of beneficiaries under its existing health scheme to more than 11 million families.
iv. So far, 26 states, including Andhra Pradesh, have signed agreements to implement AB-NHPM.

TN government sets up 24-hour helpline for protection of inter-caste couples
On July 21, 2018, The Tamil Nadu government has set a 24-hour helpline to assist and protect inter-caste couples.
i.  A special cell has been formed in all districts and cities in the state, comprising district-level officers to receive complaints of harassment .
ii.There is an online complaint registration facility in both the Crime and Criminal Tracking Network and Systems and mobile app for citizens.
iii. This has been done to eradicate ‘honour killing’ completely.

Kharchi Puja:
i. Kharchi Puja is an annual festival to cleanse the sins of mortal souls. It was originally a Hindu tribal festival. Now it is observed by all communities and religion.
ii. It features 14 deities: Shiva, Durga, Vishnu, Laxmi, Saraswati, Kartik, Ganesha, Brahma, Abadhi (God of water), Chandra, Ganga, Agni, Kamdev and Himadri (Himalaya).
iii. Kharchi Puja started with a procession. The deities and priests were escorted by the Tripura Police personnel.
iv. A guard of honour was presented for the chief royal priest known as “Raj Chantaia”.
v. Devotees joined the procession on the way to Howrah river for the customary bathing.
vi. The worship began with the dipping of 14 deities in the Howrah river. It was followed by the sacrifice of 108 animals. All these are done at government expense.
vii. The Tripura government is conducting the Kharchi Puja every year as per the 1949 merger agreement with the royal family.
viii. Kharchi Puja is the biggest festival for the Hindu tribals in the northeastern region.
ix. Every year, nearly 10-15 lakh people participate in the festival from all over India and Bangladesh.
Some National parks in Tripura:
♦ Clouded Leopard National Park
♦ Rajbari National Park

UP Police launches Digital Volunteers Campaign to check rumors
The Uttar Pradesh police has decided to hire digital volunteers to control the issue of rumors and eliminate illegal activities.
Digital Volunteers Campaign:
i. Uttar Pradesh police will hire 250 digital volunteers at each of the 1,469 police stations to control mob lynching like incidents triggered by circulation of fake news on social media.
ii. According to Uttar Pradesh Director General of Police (DGP) OP Singh, UP police, having 4,41,000 Twitter followers, is the most active on social media.

London launches action plan to become world’s most walkable city
Mayor of London Sadiq Khan has said that, he has planned to make London, the world’s most walkable city in the world by launching ‘Walking Action Plan’.
London’s Walking Action Plan:
i. London’s Walking Action Plan aims to enhance health and reduce air pollution in London which houses 8.8 million people by making streets more pedestrian friendly.
ii. This plan is part of a wider strategy for 80% of all trips to be made on foot, bicycle or public transport by 2041.
iii. People who walk or cycle to work have much lesser risk of death due to heart disease or stroke, compared to those who commute by car.
iv. According to the World Health Organization, over 92% of the world’s population live in places where air pollution levels are beyond safe limits.
v. Around 9,500 residents of London die prematurely every year as a result of long-term exposure to air pollution, as per a 2015 study by researchers at King’s College London.
vi. This plan is supported by Public Health England (PHE). Public Health England (PHE) is a government body. It recommends a minimum of 10 minutes of brisk walking every day to improve health.
vii. It is part of a wider “Healthy Streets” initiative. Sadiq Khan has assured to invest nearly 2.2 billion pounds ($2.9 billion) in this initiative.
viii. As per a research by the Greater London Authority, if every Londoner walked or cycled for 20 minutes a day, it would save Britain’s public health service nearly 1.7 billion pounds in treatment costs over the next 25 years.
Tag lines of some banks:
♦ Dhanlaxmi Bank – Tann. Mann. Dhan
♦ Dena Bank – Trusted Family Bank
♦ Deutsche Bank – A Passion to perform 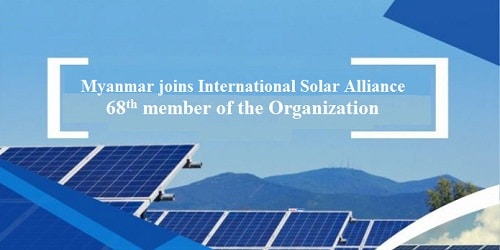 i. The ISA Framework Agreement was signed by Myanmar Minister for International Cooperation Kyaw Tin at the Delhi Dialogue in New Delhi.
ii. Other bilateral projects undertaken by the two countries are: 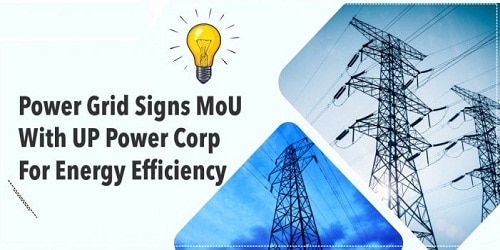 Objective:
For energy efficiency and agricultural demand side management programme.
Key Points:
i. This includes replacement of agriculture pump sets in East and South DISCOMs of UP.
ii. Investment of about Rs 2,200 to 2,500 crore in these projects by POWERGRID.
iii. Thus POWERGRID will act as an investor and a Project Management Consultant (PMC) to this project.
POWERGRID:
♦ Headquarters: Gurgaon, India.
♦ Founded: 23rd October 1989.
♦ Purpose: Transmission, Distribution and energy trading.

“Remote Sensing Toolkit” to Promote Commercial Use Of Satellite Data launched by NASA
On July 21, 2018, NASA launched an online toolkit “Remote Sensing Toolkit” to help users analyze satellite data.
i. It provides a simple system that quickly identifies relevant sources based on user input.
ii. It can be used in the areas of : research, business projects or conservation efforts.
iii. The toolkit has ready-to-use tools and code to build new tools.
iv. Through its constellation of Earth observation satellites, NASA collects petabytes of data each year.
v. The Technology Transfer program will host a tutorial of Remote Sensing Toolkit.
Background:
The NASA Technology Transfer programme reviewed more than 50 websites and found that no source was provided for data collection and research work. This prompted the US space agency to introduce the Remote Sensing Toolkit.
NASA:
♦ Headquarters: Washington D.C. , USA.
♦ Founder: Dwight D. Eisenhower.
♦ Founded: 29th  July 1958.