We are here for you to provide the important Current Affairs September 20 2018, which have unique updates of all daily events from all newspapers such as The Hindu, The Economic Times, PIB, Times of India, India Today, Indian Express, Business Standard, all Government official websites. 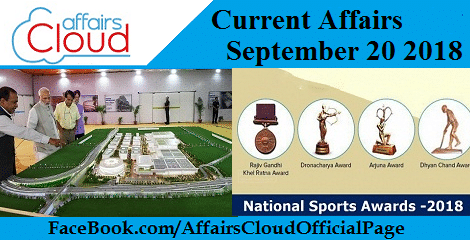 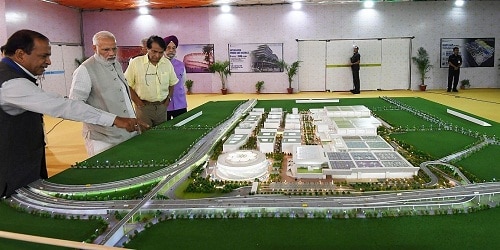 i. The estimated cost of the project is: Rs 25,703 crore.
ii. It will have an area of 221.37 acre and will be constructed in 2 phases.
iii. Phase-I and II will be completed by December 2019 and December 2024, respectively.
iv. It will be used for offering setting for international and national events, meetings, conferences, exhibitions and trade shows.
v. It will have facilities like exhibition halls, convention centre, open exhibition spaces, mixed use commercial spaces like star hotels (5, 4 and 3 star).
New Delhi:
♦ Chief Minister: Arvind Kejriwal.

President Ram Nath Kovind signed ordinance banning Instant Triple Talaq practice: Law Ministry
On September 19, 2018, the Law Ministry announced the signing of the ordinance banning the practice of instant triple talaq by the President.
i. The name of the bill is: The Muslim Women (Protection of Rights on Marriage) Bill 2017.
ii. Under this ordinance, ‘triple talaq’ has been considered illegal and void, and will attract a jail term of three years for the husband.
iii. A complaint can be filed only by the woman or her family and the offence remains non-bailable.
Law Ministry:
♦ Union Minister: Shri Ravi Shankar Prasad.
♦ Minister of State for Law: Shri P P Chaudhary.

‘Budget Dashboard’: web portal for information on budget and expenditure introduced by Ministry of Health and Family Welfare
On September 19, 2018, the Ministry of Health and Family Welfare launched a new web portal ‘Budget Dashboard’, incorporating features of Ministry of AYUSH and Department of Health Research.
i. It will have information on budget, expenditure and Bill Payment position.
ii. It will consist of the following: i. The e-newsletter would be distributed to about 50 lakh MSMEs registered on the  Udyog Aadhaar Memorandum Portal.
ii. It will act as a bridge between the Ministry and MSME units and stakeholders.
iii. It will also help in creating the awareness about the schemes and propagate the agenda of the ministry.
iv. These information includes:

Pilot project of sputum sample transportation through Department of Post launched by Health Ministry
On September 19, 2018, the Health Ministry launched a pilot service of transportation of sputum sample used for TB diagnosis through the Department of Posts in Karawal Nagar, Delhi.
i. The transportation will be followed by testing the samples.
ii. This will enable appropriate management of the TB patients and reduced disease transmission.
Other news:
Along with this, the 2nd version of web-based application of RNTCP, Nikshay Version 2.0 was launched.
About NIKSHAY:
NIKSHAY is web based solution for effectively monitoring of TB patients under Revised National Tuberculosis Programme (RNTCP). It was launched by Health Ministry and developed by National Informatics Centre (NIC).
Health Ministry:
♦ Union Minister: JP Nadda.
♦ Minister of State: Ashwini Kumar Choubey, Smt. Anupriya Patel.
♦ Secretary: MS. Preeti Sudan.

Atal Bimit Vyakti Kalyan Yojna launched for unemployed insured persons: ESIC
On September 20, 2018, the Employees’ State Insurance Corporation (ESIC) approved a new scheme- Atal Bimit Vyakti Kalyan Yojna for Insured Persons covered under the Employees’ State Insurance Act.
i. The decision was taken at the ESIC board meeting chaired by the Labour Minister Santosh Gangwar in New Delhi.
About Atal Bimit Vyakti Kalyan Yojna:
i. A relief will be payable in cash directly to Bank Account of insured person in case of unemployment.
ii. It would benefit insured persons covered under the Employees’ State Insurance Act, 1948.
Other news:
i. ESIC also approved reimbursement of Rs 10 per person to the employers to encourage the seeding of Aadhaar (UID) in ESIC database of their workers and their family members.
ii. Relaxation in eligibility conditions for Super Specialty treatment from 2 years to 6 months with contribution requirement of only 78 days.
iii. Super Specialty treatment for dependents of Insured Person has now been relaxed to insurable employment of one year with 156 days of contributions.
iv. It also approved increasing the funeral expenses from existing Rs 10,000 to Rs 15,000 being paid on the death of Insured Person.
ESIC:
♦ Full Form: Employees’ State Insurance Corporation.
♦ under Ministry of Labour and Employment, Government of India.
♦ Headquarters: New Delhi.
♦ Minister of State (I/C): Shri. Santosh Kumar Gangwar. i. Jharsuguda airport will be the second airport in Odisha to be renamed after Biju Patnaik International airport in Bhubaneswar.
Other News:
i. PM Modi to visit Odisha on Semptember 22 and will do the following: 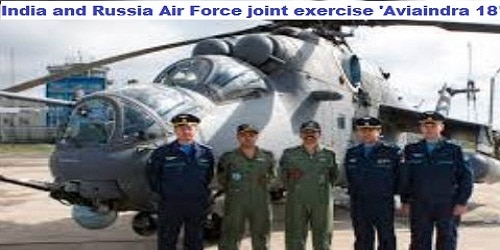 Objective:
To work on anti-terrorist operations in a bi-lateral scenario.
Key Points:
i. It is being conducted at Lipetsk, Russia.
ii. It will be again conducted in Jodhpur, India from 10 Dec to 22 Dec 18.
iii. The Indian contingent comprises of 30 officers including four women officers of Flying, Admin and Medical Branch.
iv. The aircraft that would participate in the exercise include Su-30 SM, Mig-29, Su-25, Mi-8 and An-26.
Background:
First Aviaindra was conducted in 2014 and has been planned as a bi-annual exercise.
Russia:
♦ Capital: Moscow.
♦ Currency: Russian Ruble.
♦ President: Vladmir Putin.
♦ India and Russia Military exercise name: INDRA.

ii. This was signed Mr. Saidil Mohamed’s visit in India.
iii. The Convention Centre is being established in the context of the African Union (AU) Summit that Niger is to host in 2019.
Background:
India has offered to establish Mahatma Gandhi Convention Centres in more than 20 countries in Africa, of which Centres in 9 countries are being taken up in the immediate phase.
Niger:
♦ Capital: Niamey.
♦ Currency: West African CFA franc. 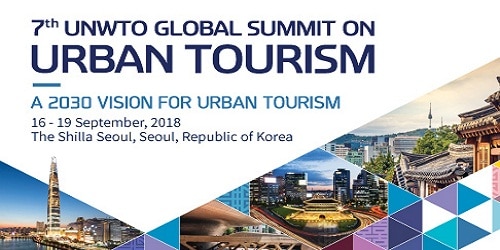 i. It was organized by The World Tourism Organization (UNWTO).
ii. The theme of the summit is: A 2030 Vision for Urban Tourism.
iii. It was supported by the Ministry of Culture, Sports and Tourism of the Republic of Korea, the Korea Tourism Organization and the Seoul Tourism Organization.
iv. The main focus of the Summit was the future of urban tourism in the context of the 2030 Urban Agenda.
v. It consisted of the following sessions:
Looking Towards 2030: An Innovative Approach to Competitiveness in Urban Destinations,
The 4th Industrial Revolution Shaping the Future of Urban Tourism ,
Fair and Inclusive Tourism: Building cities for all.
vi. The World Bank has 146 projects focusing on tourism representing approximately $2.5bn in lending and technical assistance in 6 priority regions.
vii. The venue of 8th UNWTO Global Summit on Urban Tourism 2019 will be Astana, Kazakhstan.
Republic of Korea:
♦ Capital: Seoul.
♦ Currency: South Korean won.

Background:
Since 2002, India has committed USD 2 billion for the socio-economic development of the country.
Afghanistan:
♦ Capital:  Kabul.
♦ Currency: Afghan afghani

ii. These changes will be effective from October 1, 2018.
iii. This is the first such change after keeping interest rates on small savings schemes unchanged for two consecutive quarters.
iv.  Earlier, the government had reduced the interest rates on these schemes in January -March 2018, quarter.
The changes in the schemes are as follows:

Para shuttler Raj Kumar conferred with Arjuna Award
On 19th September 2018, para shuttler Raj Kumar was conferred the Arjuna award by Union Minister of Youth Affairs and Sports Rajyavardhan Rathore.
Key Points:
i. Raj Kumar had filed a case against the Ministry of Youth Affairs and Sports, citing that his name had not been considered for the Arjuna Award by the selection committee.
ii. Arjuna Award has been conferred on him after Delhi High court delivered a verdict in favour of Raj Kumar.
iii. Raj Kumar, who hails from Punjab, had won a gold medal in the 2015 BWF Para-Badminton World Championships that was held in England.

INSV Tarini crew bestowed with Tenzing Norgay Award
All-women crew of INSV Tarini has won the Tenzing Norgay National Adventure award for completing the challenging task of sailing across the world for 8 months. Government appoints MD and CEOs in 10 state-run banks
On 19th September 2018, the government appointed managing directors (MD) and chief executive officers (CEO) for 10 state-run banks.
Key Points:
i. Out the 10 newly appointed MD and CEOs, five are serving deputy managing directors of State Bank of India (SBI).
ii. The appointments of these 10 MD and CEOs were approved by the Appointments Committee of the Cabinet headed by Prime Minister Narendra Modi.
iii. The newly appointed MD and CEOs are as follows:

Prahar: indigenously developed surface-to-surface short-range ballistic missile test fired by DRDO
On 20th September 2018, Defence Research and Development Organisation (DRDO) successfully flight tested the indigenously developed surface-to-surface short-range ballistic missile ‘Prahar’, from Launch Complex-III, Integrated Test Range (ITR) at Chandipur in Odisha.
i. Prahar was developed by DRDO. It was launched from a mobile launcher.
ii. It is a contemporary weapon system. It can carry various types of warheads and neutralise a wide range of targets.
iii. It is a solid fuelled short-range missile. It is equipped with inertial navigation system.
iv. It is a quick reaction, all-weather, all-terrain, highly accurate battlefield support tactical weapon system. Indo International Premier Kabaddi League:
i. Selection trial for the league will start from October 6, 2018. Winner will be awarded a cash prize of Rs 1.25 crore. Over 1000 players, both domestic and International, would participate.
ii. The league will have 8 teams: Bengaluru Rhinos, Chennai Cheetahs, Delhi Dumars, Telangana Bulls, Patna Panthers, Haryana Hurricanes, Mumbai Marathas and Kolkata Tigers.
iii. Each team will have 2 to 3 international players. Double round robin format will be followed. 62 matches will be played in one and a half months.
iv. Players from New Zealand, Poland, Argentina, Tanzania, Australia, Norway, United Kingdom, Canada and USA, Afghanistan, Pakistan, Iran, Bangladesh, Sri Lanka, Mexico, Mauritius, Kenya, Iraq, Denmark, will participate.
vi. NKFI will distribute 20 % of the annual profits from the league to the participating players. The games will be streamed on DSPORT TV channel.
About New Kabaddi Federation of India (NKFI):
♦ General Secretary – MV Prasad Babu
♦ Location – Bengaluru
♦ Formed – May 2017

Revolutionary leader Kondapalli Koteswaramma passes away
On 19th September 2018, revolutionary leader, writer and feminist Kondapalli Koteswaramma passed away, following a brain hemorrhage, in Vishakhapatnam, Andhra Pradesh.
i. She was 100 years old. She was born in Pamarru area of Krishna district in Andhra Pradesh.
ii. She had joined the Congress party when she was 10 years old. She was an active member of the United Communist Party in the 1940s and 50s.
iii. She had played an active role in the Telangana Rebellion (1946-1951). She had written her autobiography named ‘Nirjana Varadhi’ and three other books.

Sundeep Misra to write a book on sprinter Dutee Chand titled “Story So Far”
On 18th September 2018, Westland Books announced that, journalist, author and filmmaker Sundeep Misra, would write a book on sprinter Dutee Chand, who won two silver medals at the 2018 Asian Games.
i. The book is named “Story so far”. It would be released in 2019. It would be published by Westland Books.
ii. The book will narrate the hardships and controversies Dutee Chand has come across and how she has emerged as a rising star.