We are here for you to provide the important Current Affairs November 10 2018, which have unique updates of all daily events from all newspapers such as The Hindu, The Economic Times, PIB, Times of India, PTI, Indian Express, Business Standard and all Government official websites. 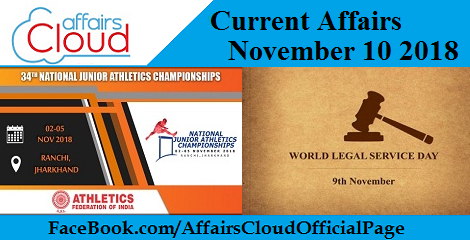 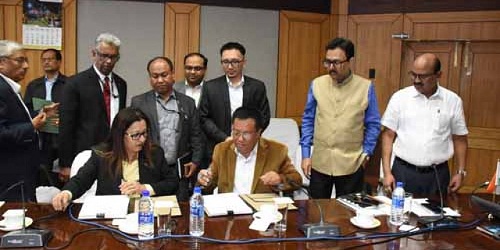 i. According to the MoU, the companies will design, develop, manage and implement Smart City Projects under the Smart City Mission in Imphal. The project will be finished within 3 years.
ii. During signing of the MOU, Manipur Government was represented by Municipal Administration, Housing and Urban Development (MAHUD) Department Director Th. Harikumar and IL&FS Township and Urban Assets Limited by its Head-Urban Project (East and North-East) Chandana Roychowdhury.

Bihar approves funds worth Rs 25000 for graduate girls
On 8th November 2018, Bihar government approved a proposal to offer Rs 25,000 to every girl graduating in 2018 and onwards.
Key Points:
i. This decision was made at the Cabinet meeting chaired by Bihar Chief Minister Nitish Kumar.
ii. The one-time payment will be offered to every girl who graduated from the colleges of Bihar on or after April 25, 2018, irrespective of pass division, community or region.
iii. Bihar Cabinet has allotted Rs 300 crore for disbursal of this payment to an estimated 1,20,000 girls about clear graduation course this year.
iv. This scheme is a part of a larger government scheme that aims to pay each girl Rs 54000 including payments made to her from birth to graduation.
Some wildlife sanctuaries in Bihar:
♦ Bhimbandh Wildlife Sanctuary
♦ Kaimur Wildlife Sanctuary
♦ Udaypur Wildlife Sanctuary

Kerala govt scheme to provide free education to Ockhi-hit kids
On Nov.8 2018 The Kerala government has commenced a scheme to offer free education and vocational training to the children of fishermen who died or went missing in the 2017 Ockhi cyclonic storm.
Chief Minister Pinarayi Vijayan announced that government would allocate Rs 13.92 crore from the Chief Minister’s Disaster Relief Fund.
Benefits of the scheme:-
i. It expects that 194 students, which includes children at all levels, from lower primary to professional colleges, have been identified as beneficiaries.
ii. The scheme provide a package of:-

iii.This Project will continue till 2037.
About Kerala and Ockhi storm
♦ Ockhi cyclonic storm was a Category three level tropical cyclone that had hit the shores of Kerala in November 2017.
♦ Capital –  Thiruvananthapuram
♦ Governor –  P. Sathasivam
♦ Language – Malayalam

Centre to infuse Rs 3,054 cr as capital in Allahabad Bank
On Nov.9 2018 According to a notification to the National Stock Exchange , Allahabad bank has informed that Rs.3,054 crore was infused by centre as an investment during the current financial year 2018-19. 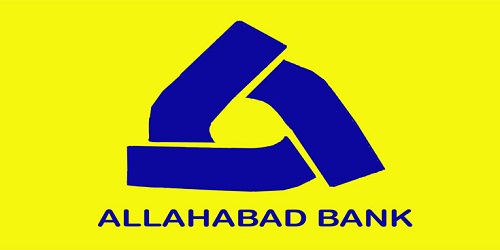 i. The bank’s capital adequacy ratio as per Basel-III stood at 6.88 per cent as on June 30, 2018. The government owned a 71.81 per cent stake in Allahabad Bank at the end of first quarter of FY19.
ii. The public sector bank reported a net loss of Rs 1,944.37 crore for the first quarter this fiscal against a net profit of Rs 28.84 crore, during the same period last fiscal as the lender saw a 29 per cent fall in its operating profit and a 53.6 per cent rise in provisions to cover sticky loans.
About Allahabad Bank
♦ Headquarters –  Kolkata, India
♦ CEO & MD –  S. S. Mallikarjuna Rao
♦ Tagline –   A tradition of trust Key Points:
i. The award was presented at the 2-day conference on “CCTNS–Good practices and Success Stories” organised by the National Crime Record Bureau (NCRB) in New Delhi.
ii. Ministry of Home Affairs also awarded Anil Kumar Jha, Special Director General (CID) of the force, for his outstanding contribution in implementing the project.
iii. The award has been given for citizen centric service delivery. Assam police has automated passport verification and Permanent Residential Certificate (PRC) services using the online CCTNS.
iv. Under the CCTNS, a mobile application was launched recently for ease of availability of services to the citizens.
v. Assam Police had launched a Citizen Portal on January 1, 2016 that offers 10 types of services for the people.
Some National Parks in Assam:
♦ Dibru-Saikhowa National Park
♦ Kaziranga National Park
♦ Manas National Park

Lok Sabha Secy Gen Snehlata Shrivastava  gets one-year extension
On November 8 2018 Speaker Sumitra Mahajan extended tenure of Snehlata Shrivastava, the first woman Secretary General of the Lok Sabha for one year from December 1, 2018 up to November 30, 2019.She was scheduled to retire on November 30 2018.
i. She had various experiences by served as Secretary in the Ministry of Law and Justice and as Special/Additional Secretary in the Ministry of Finance.
ii. She was also handled senior positions in the Madhya Pradesh government, including Principal Secretary in the departments of Culture and Parliamentary Affairs.

Bug covered ‘bionic mushroom’ generates clean energy
i. US scientists have tested an idea of producing electricity from a mushroom covered in bacteria. The scientists used 3D printing to attach clusters of energy-producing bugs to the cap of a button mushroom.
ii. The fungus provided the ideal environment to allow the cyanobacteria to generate a small amount of power.The authors say their fossil-free “bionic mushroom” could have great potential. i. It was organized by Jharkhand Athletics Association under the guidance of Athletics Federation of India (AFI). This is an Annual Athletics event of AFI.
ii. Over 2000 athletes from various parts of India took part in the championship.
iii. The National records include:

Ex-Minister Ramanath Rai releases book ‘Arivu’ on Mouth Cancer by Dr.Murali Mohan Chunthar
i. November 7 is observed as National Cancer Awareness Day in India each year.On same day Dr. Murali Mohan Chunthar has written a book named “Arivu” and released in Mangaluru.This book explains about Mouth Cancer and prevention of the disease.
ii. He was a dental surgeon and also DK Home Guard Commandant.He is bringing awareness of mouth cancer and seriousness about eating tobacco,smoking etc by his book. 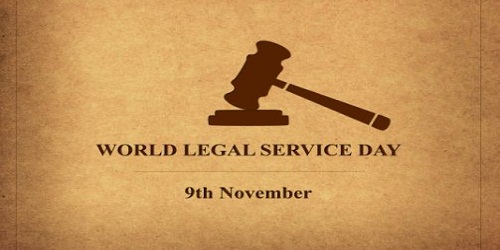 When and purpose of the day:-
Legal service day was formed by NALSA which stands for National Legal Services Authority. This day was first started by the Supreme Court in the year 1995 all across the India to offer help and support to the weaker and poor group of sections of people which may be women, disabled persons, Scheduled Tribes, children, Scheduled Castes, human trafficking victims as well as natural calamities victims.