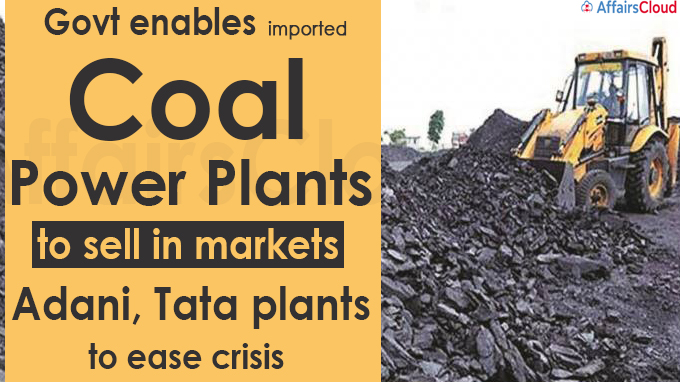 Even though being the world’s 2nd largest producer and consumer of coal (after China), India is currently facing a coal crisis.

Way ahead: To overcome the coal crisis, the government has undertaken the following initiatives to improve the coal stock.

Union Minister of Power and Ministry of New & Renewable Energy R K Singh approved certain guidelines over the provisions of National Tariff Policy, 2016 and enabled imported coal-based plants (having sufficient coal) to operate and sell the un-requisitioned power in the power exchange.

ii.Due to the price of coal in the international market becoming ~ $150 a tonne, most of the imported coal-based power plants are not operating despite the high power scenario in the country.

iii.If the procurer does not requisition (demand) power from the power plant with which he has signed the PPA, (24 hours in advance prior to midnight of the day of delivery of power) the generator could sell the un-requisitioned power in the power exchange.

iv.The gains from the sale of such un-requisitioned power (after deducing energy charges) will be shared 50:50 between the developer and the procurers who are having the PPA.

v.Now with this provision, Adani Power and Tata Power could begin generation in their imported coal-based projects in Gujarat.

vi.Karnataka, Andhra Pradesh, Gujarat and Tamil Nadu have power plants that use imported coal with a total capacity of about 15 GW.

The Ministry of Coal has amended the Mineral Concession Rules, 1960 to allow the lessee of a captive mine to sell up to 50 percent of the total coal or lignite (on payment of additional amount) produced in a financial year.

i.The lessee could sell the coal or lignite only after meeting the requirement of the end-use plant that is linked with the mine and this condition is applicable for both the private and public sector captive mines.

ii.Background: In March 2021, the government amended the the Mines and Minerals (Development and Regulation) (MMDR) Act, 1957 named ‘MMDR Amendment Act, 2021’ to this effect.

iii.The Government has made provisions for grant of mining lease to a Government company or corporation for coal or lignite for 50 years to boost production of coal or lignite. The 50 years period could also be extended by 20 years upon requirement.

Note – Prior to 2015, the grant of mineral resources was through the ‘first come first serve’ method (now granting leases for mining operations).

Additional Information – The daily consumption of electricity has crossed beyond 4 Billion units per day. As per the annual report (2020-21) of CIL (Coal India Limited), 69 percent of the total electricity generation of India is coal-based.

About Ministry of coal:

India Worst-hit in TB elimination – ‘Global TB report’ by WHO