China successfully launched a spacecraft carrying two astronauts, in its longest-ever manned space mission. This team would later join its experimental space lab orbiting the Earth as the country moved a step closer to establish its permanent space station by 2022.

China successfully launches the manned spacecraft Shenzhou-11, carrying two astronauts who will remain in space for 33 days, the longest manned mission in its space program to date. 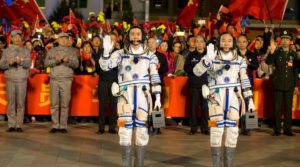