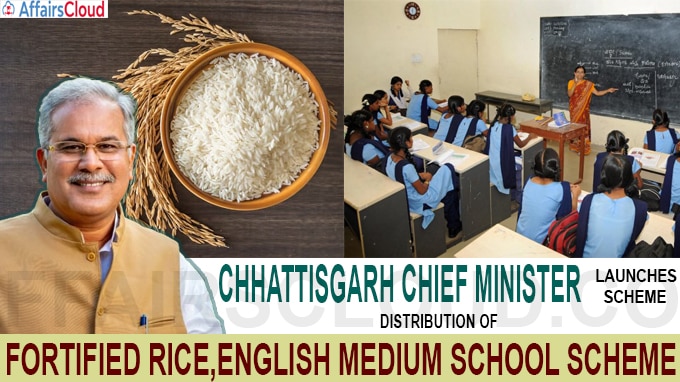 The fortified rice distribution scheme will be launched on pilot basis in Kondagaon district of the state which will aid in checking malnutrition and anemia. It will be distributed through fair price shops (FPS).

The CM also inaugurated Rs 130 crore Swami Atmanand Government English Medium School Scheme for setting up of English medium schools which aims at providing education in English to the children. Initially, 52 schools will be started.

i.On September 14, 2020 Chanesh Ram Rathiya, Veteran Congress leader and former Chhattisgarh minister, passed away at the age of 78 due to COVID-19 at a hospital at Raigarh, Chhattisgarh. He was a prominent leader from the tribal society of north Chhattisgarh.

ii.On September 20, 2020 The first-ever India Happiness Report 2020 was released by Professor Rajesh K Pillania, which ranks all 36 States and Union Territories(UTs) on the basis of their happiness quotient. Mizoram tops the ranking followed by Punjab and Andaman and Nicobar Islands. Odisha, Uttarakhand and Chhattisgarh were least happy states.