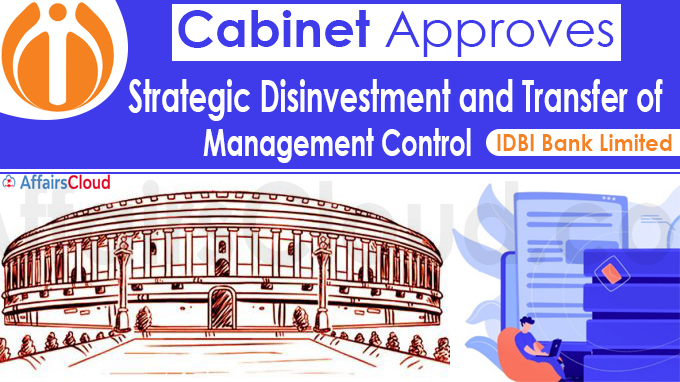 i.In March 2021, Reserve Bank of India(RBI) removed the LIC-controlled IDBI bank from its prompt corrective action (PCA) framework which was imposed in May 2017. Click here to know more

ii.In Union Budget FY22, Finance Minister Nirmala Sitharaman stated the privatisation of IDBI Bank along with two other state-run banks in FY22 with a disinvestment target of Rs 1.75 lakh crore.

i.After disinvestment IDBI Bank shall generate more business without any dependence on LIC and Government assistance/funds and the capital infusion is also expected from strategic buyers.

ii.The shareholding to be divested by GoI and LIC will be decided at the time of structuring of the transaction in consultation with the RBI.

i.In FY21, the IDBI bank turned profitable on an annual basis (after five years) it reported a standalone profit of ₹1,359 crores against a loss of ₹12,887 crores in FY20.

iii.It reported a four-fold standalone profit after tax to Rs 512 crore in Q3FY21 compared to Rs 135 crore in Q3FY2O shows a 38% growth in its net interest income (NII).

On January 27, 2021, The Cabinet Committee on Economic Affairs (CCEA) gave in-principle approval for 100% strategic divestment of the Indian Government’s shareholding in Rashtriya Ispat Nigam Limited (RINL). In addition to this it also gave approval for management control of RINL by way of privatization.