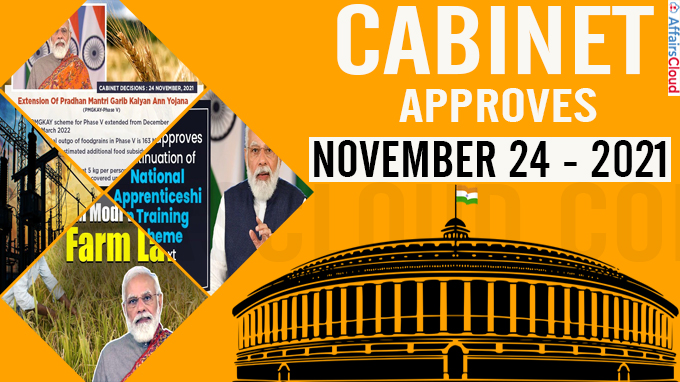 The Union Cabinet approved a bill to repeal the 3 farm laws, which were passed by Parliament in September 2020, with an objective to bring reforms in the agriculture sector, especially the marketing of farm produce.

Process of Repealing a Law:

Laws can be repealed in two ways, either through an ordinance, or through legislation.

i.Ordinance – In case an ordinance is used, it would need to be replaced by a law passed by Parliament within six months under the article 123 of the constitution (President promulgate Ordinances).

Note – The Repealing and Amending Act was first passed in 1950 when 72 Acts were repealed.

i.Farmers’ Produce Trade and Commerce (Promotion and Facilitation) Act 2020: It permits the sale of agricultural produce outside regions regulated by Agricultural Produce Marketing Committees (APMC), which is constituted by respective state legislations.

ii.Farmers (Empowerment and Protection) Agreement on Price Assurance and Farm Services Act 2020: It provides the framework for contract farming, through Farming Agreement before production or rearing of farm produce.

iii.Essential Commodities (Amendment) Act, 2020: It is aimed at removing commodities such as cereals, pulses, oilseeds, edible oils, onion and potato from the list of essential commodities.

ii.The 3 farm laws had triggered massive protests by around 40 farmer unions (including the Samyukta Kisan Morcha (SKM)) mainly from Punjab and Haryana, in New Delhi for more than a year with the demand to repeal 3 farm legislations.

iii.In the backdrop of the protest, the PM had announced the withdrawal of the 3 farm laws on November 19, 2021, saying the government could not convince protesting farmers the benefits of those reforms.

-Approved Extension of PMGKAY from December 2021 to March 2022

Cabinet has approved the extension of the free foodgrain distribution scheme under the Pradhan Mantri Garib Kalyan Anna Yojana (PMGKAY)- Phase V for another 4 months i.e. from December 2021 to March 2022, with an estimated additional food subsidy of Rs 53344.52 Crore.

i.In March 2020, the GoI announced the distribution of additional free-of-cost foodgrains (Rice/Wheat) to about 80 Crore National Food Security Act (NFSA) beneficiaries at the scale of 5 Kg per person/month under the PMGKAY to ensure food security of poor/vulnerable beneficiaries/households during COVID-19.

ii.Under PMGKAY food grains will be provided over and above the regular monthly NFSA foodgrains i.e., regular entitlements of their ration cards.

b.Execution of PMGKAY Phase  I- IV:

ii.So far, a total of around 600 LMT foodgrains (equivalent to about Rs 2.07 Lakh Crore in food subsidy) had been allocated to the States/Union Territories (UTs) under the PM-GKAY (Phase I to IV).

Cabinet approved the formation of a Company (Special Purpose Vehicle (SPV)) to privatise electricity distribution and Retail Supply Business in the UT of Dadra & Nagar Haveli and Daman & Diu (DNH&DD).

i.Privatisation will also fulfill the desired outcomes of better services to over 1.45 lakh consumers of DNH&DD, operational improvements and functional efficiencies in distribution and provide a model for emulation by other utilities across India.

ii.The DNH-DD Power Distribution Corporation Limited would be incorporated as a wholly owned Government Company and Trust(s) to manage the terminal benefits of the personnel transferred to the newly formed company.

iii.Transfer of assets, liabilities, personnel etc to the newly formed company will be done as per the DNH&DD Electricity (Reorganization and Reforms) Transfer Scheme, 2020.

-Approved Continuation of ACROSS Scheme for 5 years till 2026

The Cabinet Committee on Economic Affairs (CCEA) chaired by the PM approved the continuation of the umbrella scheme ‘Atmosphere & Climate Research-Modelling Observing Systems & Services (ACROSS)’ along with its 8 sub-schemes to the next finance cycle of 5 years i.e. from 2021 to 2026 at an estimated cost of Rs 2,135 crore.

iii.The 8 sub schemes of ACROSS which is being implemented by IMD, IITM, NCMRWF and INCOIS:

-Approved Continuation of NATS for 5 years till FY26

CCEA approved the continuation of the National Apprenticeship Training Scheme (NATS) of Ministry of Education for the next 5 years from i.e. from FY22 (financial year 2021-22) to FY26.

i.The apprentices who have completed graduate and diploma programmes in Engineering, Humanities, Science and Commerce will be given a stipend of Rs 9,000 and Rs 8,000 per month respectively.

ii.Under the scheme, ~9 lakhs apprentices will be trained by industry and commercial organisations.

CCEA approved continuation of the umbrella scheme of MoES, ‘Ocean Services, Modelling, Application, Resources and Technology (O-SMART)’ for implementation from 2021-26 at an overall cost of Rs 2177 crore.

i.The 7 sub-schemes of the schemes include

ii.The 7 sub schemes are being implemented by autonomous institutes of the Ministry of Earth Sciences such as National Institute of Ocean Technology (NIOT), Chennai, and Indian National Center for Ocean Information Services (INCOIS), Hyderabad, etc.

iii.Objective: To provide forecast and services based on the continuous observation of oceans, development of technologies and exploratory surveys for sustainable harnessing of oceanic resources (both living and non-living), and promotion of front-ranking research in ocean sciences.

The Cabinet also approved the Atal Mission for Rejuvenation and Urban Transformation 2.0 (AMRUT 2.0) till 2025-26 with an outlay of Rs 2,77,000 crore. It aims to make cities ‘water secure’ and ‘self-sustainable’ through circular economy of water.