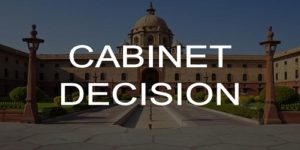 Union Cabinet has given its approval for doubling the investment limit under the Pradhan Mantri Vaya Vandan Yojana (PMVVY) from Rs 7.5 lakhs to Rs 15 lakhs.

This scheme was launched with an objective to provide social security during old age and protect Senior Citizens (persons aged 60 years and above) against a future fall in their interest income due to uncertain market conditions.

Mutual Recognition Agreement (MRA) between ICAI and SAICA envisages establishment of a mutual co-operation framework for the advancement of accounting knowledge, advancing the interests of their respective members and positively contributing to the development of the accounting profession in both the countries.

Cabinet approves Restructuring of the Indian Bureau of Mines (IBM)

Union Cabinet has approved the restructuring of the Indian Bureau of Mines (IBM) by upgradation, creation and abolition of certain Joint Secretary-level posts and above.

The Project envisages setting up of the 100 bedded General Hospital at Rural Health Training Centre (RHTC), Najafgarh, New Delhi for the local population of 13.65 Lakh spread across 73 villages.

The protocol will be applicable to both – smoking and chewing or smokeless tobacco (SLT) forms – adopted under the World Health Organization Framework Convention on Tobacco Control (WHO FCTC).