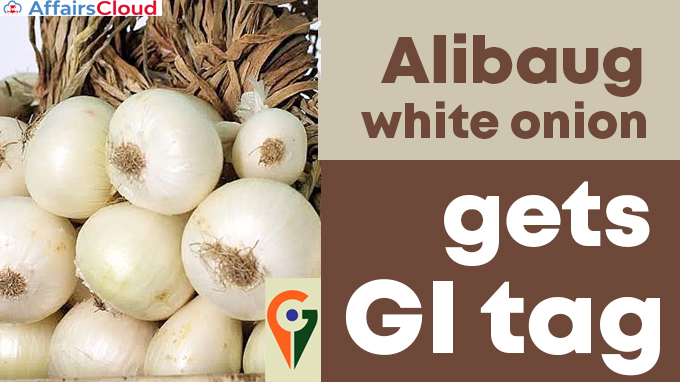 The famous white onion of Alibaug, Raigar district in Maharashtra got the Geographical Indication (GI) tag. It will provide a unique identity to this crop and expansion in the agricultural market.

i.The variety has medicinal quality and it is used for the treatment of heart diseases and controlling cholesterol. It helps in the creation of insulin, beneficial for diabetics patients. It was mentioned in the official gazette in 1883.

ii.It has a unique sweet taste and no-tear factor.

iii.The average income generated from this crop is around Rs 2 lakh per acre.

A variety of rice named Wada Kolam, grown in Wada in Palghar district of Maharashtra has got the GI tag.

i.It is also known as Zini or Jhini rice. A traditional variety specially grown in Wada tehsil of Palghar.

The famous variety of Edayur chilli, which has been cultivated in the area for over 150 years got the GI tag. It belongs to Malappuram district of Kerala.

It has very low pungency. It required specific environment and soil conditions and traditional methods of cultivation.

i.Kuttiattoor mango of Kannur district in Kerala also got the GI tag.

ii.Kuttiattoor is known as Mango Village of Kannur.

ii.It has a unique appealing orange-yellow colour and excellent taste and flavour.

i.It is ceremonial traditional rice grown in Balaghat  as the district comes under the highest rainfall region of MP.

ii.The cooked rice is sweet in taste and has a strong aroma. It is a bit sticky so it does not lose softness and retain water even after eight hours of cooking. Due to its pleasant aroma, sweetness and the ability to make milk thick, it is widely used for making kheer in homes and temples in Balaghat district.

iii.It is a photosensitive, tall, medium slender grained plant. It is grown in irrigated midland, rainfed lowland of Balaghat district.

iv.Its cultivation requires well-prepared fields and extra care to maintain purity of grains. Organic manure is used to maintain aroma and softness. Its yield potential is around 2.5 to 3 tons per hectare.