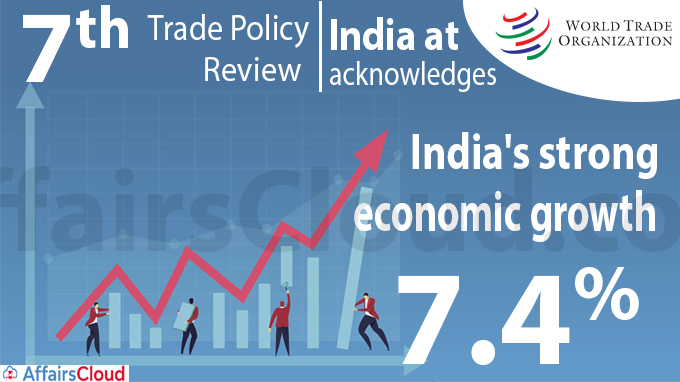 –India implemented several measures to facilitate trade during 2015-20 such as simplification of procedures and customs clearances for imports and exports.

–The other trade-facilitation initiatives introduced by India since 2015 include introduction of Indian Customs Electronic Gateway (ICEGATE); Single Window Interface for Facilitation of Trade (SWIFT); the Direct Port Delivery and the Direct Port Entry facilities; and the increased use of the Risk Management System (RMS).

–To support trade, India also provides a number of incentives, in the form of direct subsidies and price support schemes, tariff concessions or exemptions, or preferential rates of interest.

–India’s role in the global efforts against the Covid-19 pandemic was appreciated and was acknowledged as the as the “pharmacy of the world”.

–The strong economic growth in India led to an improvement in socio-economic indicators, such as per-capita income and life expectancy in India.

–FDI (Foreign Direct Investment) in India raised by more than 10% year-on-year to reach USD 40 billion in the first six months of 2020-21.

–India’s reforms have increased the efficiency and inclusiveness of the Indian economy thereby emerging as 5th largest economy in 2019.