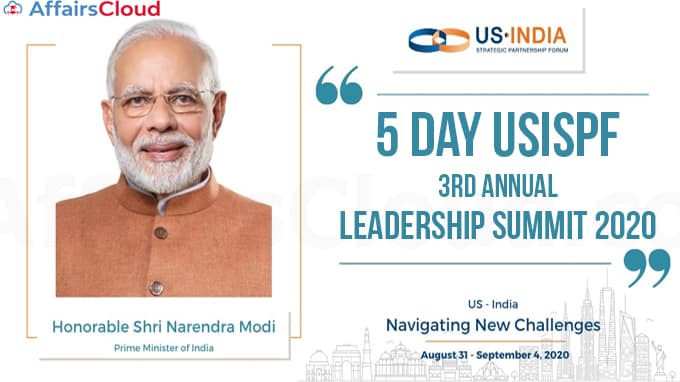 The 5 days long US-India Strategic Partnership Forum (USISPF) 3rd Annual Leadership Summit was held from August 31-September 3, 2020 on the theme “US-India Navigating New Challenges”. The aim of the summit was to discuss enhancing strategic and economic collaboration between the US and India with focus on  trade and investment, healthcare, collaboration in fintech, technology and India’s position in global supply chains.

During the summit, Prime Minister Shri Narendra Modi delivered the Special Key Note Address. The key points from his address:

Minister of Petroleum and Natural Gas and Steel, Dharmendra Pradhan participated in the USISPF- 3rd Annual Leadership Summit. The Minister underlined the importance of energy infrastructure as a key to transformation in India and invited US industry leaders to take advantage of the opportunities being created in the Indian energy sector.

The Finance Minister of India Nirmala Sitharaman engaged in a virtual discussion with US-India Strategic Partnership Forum’s (USISPF) Board of Directors during the summit.

The USISPF Board of Directors is represented by 21 US and Indian CEOs whose businesses represent a market capitalization of USD 1.7 trillion, leading influencers of the Indian diaspora, prominent members of the foreign policy fraternity, and senior diplomats from both governments.

The US-India Strategic Partnership Forum (USISPF) announced the formation of its India Executive Leadership Board that was headlined by an address by Vice President Michael Richard (Mike) Pence, Vice President of US.

–At the summit, USISPF honoured Chairman of Mahindra group, Anand Mahindra and Shantanu Narayen, Chairman & CEO (Chief Executive Officer) of Adobe with the 2020 Leadership Awards which is awarded each year for exemplary vision towards promoting U.S.-India bilateral ties.