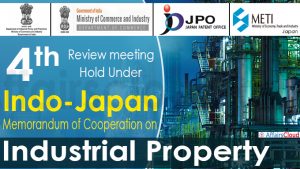 On 12th March 2021, 4th Review Meeting held virtually between Department for Promotion of Industry and Internal Trade (DPIIT), Ministry of Commerce and Industry of India and the Japan Patent Office (JPO), Ministry of Economy, Trade and Industry(METI) of Japan under Memorandum of Cooperation (MoC) on Industrial Property signed in 2015.

i.In June 2015, JPO & Department of Industrial Policy and Promotion (DIPP) (predecessor to the DPIIT) signed an MoC in the field of Industrial Property.

ii.As part of this MoC, from 2017 both these entities hold the review meeting every year.With this success, In 2019, the JPO became the first Intellectual Property (IP) office in the world to start the Patent Prosecution Highway (PPH) Pilot Program with India.

i.Agreed to act mutually & competent International Searching and International Preliminary Examining Authority (ISA/IPEA) for any international patent application filed with them under the PCT, from 1 July 2021.

iii.Both sides reviewed the progress on the industrial property between India and Japan, as well as the Action Plan between the Controller General of Patents, Designs and Trademarks (CGPDTM) of India.

iv.The Ministries agreed to hold the IT Experts Meeting once a year between the Offices to share information and experiences on initiatives regarding development of IT infrastructure.

About Department for Promotion of Industry and Internal Trade (DPIIT):