On April 30, 2020 Scientists and students from Wadia Institute of Himalayan Geology(WIHG), an autonomous institute under the Department of Science &Technology, in the study, published in the Global and Planetary Changes journal has revealed a 35 thousand-year history of river erosion and identified hotspots of erosion and wide valleys that act a buffer zones in Ladakh Himalayas. 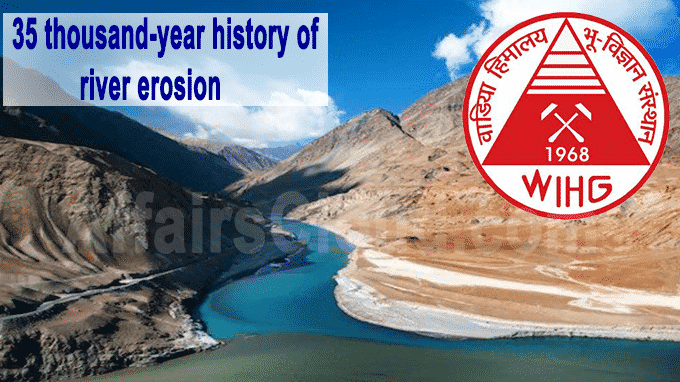 i.The research shows how rivers in drier Ladakh Himalaya are operating on longer time scales and how they respond to varying climates, an understanding of water and sediment routing, which is important as the country improves its infrastructure and develops smart cities.

ii.It helps to understand the river-borne erosion and sedimentation, which are the main drivers that make large riverine plains, terraces, and deltas which in due course becomes the cradle to evolving civilizations.

iii.To understand the landform evolution in transitional climatic zone the Zanskar catchment was explored by WIHG team by using morpho stratigraphy and origin study of landforms like valley fill terraces, alluvial fans(triangle-shaped deposit of gravel, sand, and even smaller pieces of sediment, such as silt).

Highlights of the study

i.Discovered the rivers that drained Himalayas, its foreland that  eroded the most and  the zones that receive these eroded sediments and fill up.

ii.The Ladakh Himalaya forms a high altitude desert between Greater Himalayan ranges and Karakoram Ranges. The Indus and its tributaries are major rivers flowing through the terrain.

iii.The Zanskar River is one of the largest tributaries of the upper Indus catchment, which drains orthogonally by highly deformed Zanskar ranges.

v.Suggested that the wide valley of Padam, with an area of 48 square km, in the upper Zanskar, has stored a vast amount of sediments in these landforms.

vii.The sediment contribution from such transient basins is significant when compared with the 4–7 km3 of sediment reportedly eroded from the entireIndus system in Ladakh since the Last Glacial Maximum(LGM) and the 7–22 km3 from the Zanskar since last 10 thousand years, Hence, Padam valley is a hotspot of sediment buffering in the Zanskar.

viii.Suggested that most sediments were derived from Higher Himalayan crystalline that lie in the headwater region of Zanskar.

ix.The dominant factors responsible for sediment erosion were deglaciation and Indian Summer Monsoon derived precipitation in the headwaters despite the presence of a geomorphic barrier (the deep, narrow gorge) between the upper and lower catchments of the river, and it remained connected throughout its aggradation history.

About WIHG:
It was established in June 1968
Objectives- To undertake, aid, promote, guide and coordinate research in geology of the Himalaya and foster a tradition of scholarships.
Headquarters– Dehradun, Uttarakhand
Director– Kalachand Sain