The 30th Pro-Active Governance and Timely Implementation (PRAGATI) platform was chaired by Prime Minister Narendra Modi in New Delhi. On his 30th interaction, many issues were reviewed. This was the first meeting of PRAGATI chaired by the Prime Minister in his second term in office. 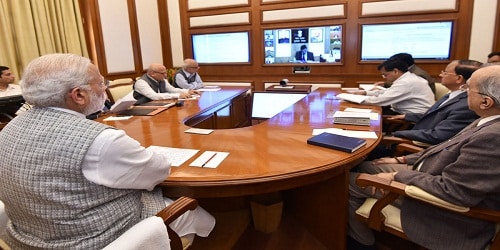 Review on AyushmanBharat
Dialogue with state governments was called by the Prime Minister to evolve best practices and provide further improvement in the Ayushman Bharat scheme.

Divyangjan
Narendra Modi suggested a mechanism to collect feedback forms from Divyangjan (persons with disability) regarding the accessibility issues faced by them in public premises under the government scheme Saugamya Bharat Abhiyan.

Jal shakthi movement
i. The state governments were called upon to put maximum efforts in conserving water, especially under the current monsoon Season by the Prime Minister.
ii. The significance of Jal shakthi were highlighted.

PRAGATI
It is ICT (Information and Communication Technology) based multi-modal platform for pro-active governance and timely implementation.