Two Indian – Americans Shantanu Narayen (Chief of Adobe) and Vivek Murthy (Former US Surgeon General) will be honoured with the prestigious ‘Great Immigrants’ annual award on US’s Independence Day on July 4. Shantanu Narayen and Vivek Murthy are among 30 honorees for 2017, representing more than 30 different countries of origin, a wide range of personal immigration stories, and a high-level of professional leadership in numerous fields.

55-year-old Shantanu Narayen a native of Hyderabad has an undergraduate degree in electronics engineering, a master’s degree in computer science, and an MBA from UC Berkeley. 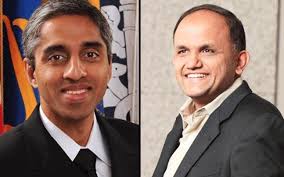 About Great Immigrants – The Pride of America Honor:

Great Immigrants honor is conferred every year on July 4 since 2006 by Carnegie Corporation of New York.