On December 26, 2019 United Kingdom(UK)-based Centre for Economics and Business Research (CEBR) released its 11th annual report titled ‘World Economic League Table 2020′(WELT 2020). According to the report, India is expected to overtake Germany as the fourth-largest economy in the world by 2026. It also estimated that India will overtake Japan as the third-largest economy by 2034. The report in detail are as follows: 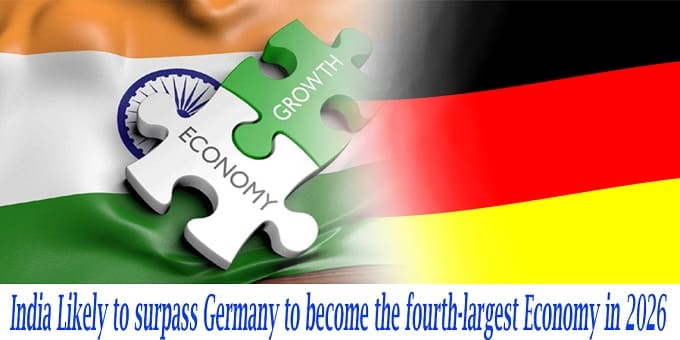 ii.India in 2019: India overtook both France and the United Kingdom to become the 5th largest economy in 2019.

iii.Next 15 years: The report estimated that India, japan and Germany will battle for the 3rd position in the next 15 years.

iv.Current slow growth: India which so far being hailed as the world’s fastest-growing major economy, suddenly saw growth decline to a 6-year low of 4.5% in the September quarter (Quarter 2/Q2) of 2019-20. It was mainly due to slowdown in investment, driven by financial stress among rural households and weak job creation.

i.USA and China: United States of America (USA) will remain as the world’s largest economy throughout 2020s and may be overtaken by China in 2033.  In 2019, USA reached 24.8% of world Gross Domestic Product (GDP) which is its largest share of the world economy since 2007.The US economy has managed to reach its highest share of world GDP for 12 years.

ii.UK: The UK is expected to overtake France by 2034 where the UK economy will be a quarter larger than that of France.

vi.World Economic League Table: It is an annual calculation by CEBR jointly published by CEBR and Global Construction Perspectives. The base data for 2019 is taken from the International Monetary Fund (IMF) World Economic Outlook(WEO).