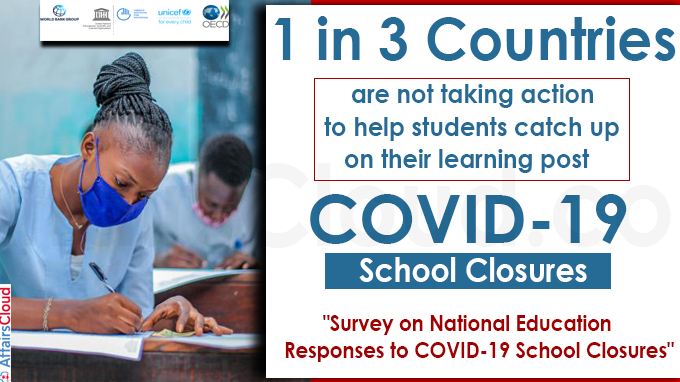 The report, “Survey on National Education Responses to COVID-19 School Closures” states that, Schools were or are still closed in 1 in 3 countries due to the Covid-19 pandemic have not yet implemented remedial programmes to mitigate learning loss. At the same time, only 1/3rd of countries are taking steps to measure learning losses in primary and lower second levels, mostly among high-income countries .

ii.For the report, a total of 142 countries were surveyed between February to May 2021 among 4 schooling groups – pre-primary, primary, lower secondary and upper secondary.

Recommendations & Findings of the Report:

i.Schools should be opened at the earliest to ease-out psychological displeasure faced among young childrens and minimize dropouts.

ii.Countries should work on improving girls centric policies to ensure their safe return to school

iv.Remote Learning (Radio & TV broadcasts) became popular among low-income countries, which acts as a lifeline for many childrens among vulnerable groups

As per the Performance Grading Index (PGI) 2019-20 for States & UTs released by the Ministry of Education – Punjab, Chandigarh, Tamil Nadu, Andaman & Nicobar Islands & Kerala occupied the highest grade (Grade I ++) for 2019-20