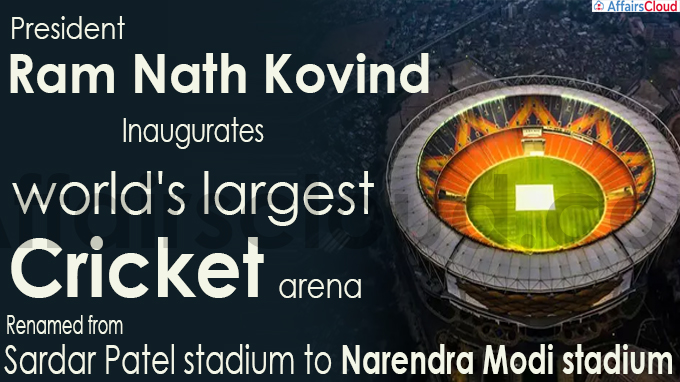 President of India, Ram Nath Kovind was on a 2 day visit to Gujarat from February 23 to 24, 2021. As part of his visit, he inaugurated the World’s Largest Cricket Stadium, the refurbished Sardar Patel Stadium, Motera, Ahmedabad, Gujarat, which was renamed as  Narendra Modi Cricket Stadium on February 24, 2021. It is named after the sitting Prime Minister(PM) Narendra Modi.

i.It has been set up by the Gujarat Cricket Association (GCA).

ii.The stadium has been built at an estimated cost of Rs 800 crore and has an accommodation capacity of 1.32 lakh spectators.

The inauguration was done in the presence of Union Home Minister Amit Shah and Union Sports Minister Kiren Rijiju among other dignitaries.

The stadium has taken the top spot from Melbourne Cricket Ground in Australia which can accommodate 90,000 to become the largest cricket stadium in the world

Conceptualised– The stadium was  conceptualised by PM when he was Chief Minister of Gujarat. He was the president of Gujarat Cricket Association at that time

Area– It is spread over 63 acres. The total area of the stadium is equal to 32 Olympic size soccer fields put together.

Enclave– The stadium is inside the Sardar Vallabhbhai Patel Sports Enclave

It is to be recalled that, the Sardar patel Cricket Stadium which had a seating capacity of 49,000 was closed in 2015 to demolish it and rebuild a new one in its place which will be the largest in the world with the best of facilities.

Note: The 1st match after the opening of the stadium is the 3rd Test between India and England, a day-night game that started from February 24, 2021. It will also host the fourth and final game of the series from March 4, 2021

ii.It is spread over 200 acres on the Sabarmati river bank in the North East of Ahmedabad.

ii.These 3 will be equipped to host any international sports event, with this  Ahmedabad will be known as the ‘sports city’ of India.

As part of his 2 day visit to Gujarat, the President went to  Central University of Gujarat (CUG) at Gandhinagar, Gujarat on February 23, 2021 as a chief guest of CUG’s 3rd convocation.

President of India Ram Nath Kovind visited Diu Town in the Union Territory (UT) of Dadra and Nagar Haveli & Daman and Diu from December 25-28, 2020. During the visit, he laid Foundation stone & Inaugurated many developmental projects.