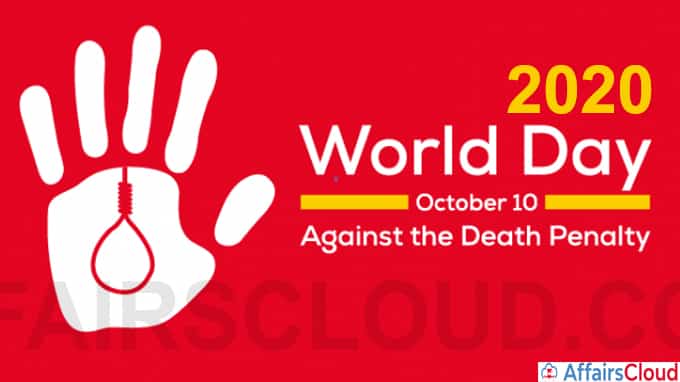 Access to counsel – A matter of life or death:

The World Day Against the Death Penalty 2020 focuses on the Access to counsel – A matter of life or death, since the process of arrest, detention and trial of a capital case cannot be guaranteed without the access of effective legal representations.

ii.The Council of Europe and the European Union officially recognised the World Day Against the Death Penalty in 2007.

ii.More than 20 countries executed the death penalty in 2019 and most executions were carried out in China, Iran, Saudi Arabia, Iraq and Egypt.

i.The European Union and the Council of Europe reaffirmed their opposition to the use of death penalty in all circumstances and called for the universal abolition of death penalty.

ii.The members of United Nations (UN) are called out to support the Resolution on a Moratorium on the Use of the Death Penalty at the 75th session of the UN General Assembly in December 2020.

i.The last execution of the death penalty in India took place in March 2020, where the four accused of Delhi Nirbhaya rape case were hanged.

ii.As of May 2019, around 371 individuals are under sentence of death penalty in India.

i.According to the Indian Criminal Procedure Code, hanging is the method of execution in the civilian court system.

ii.Under the 1950 Army Act, both hanging and shooting are listed as the method of execution in the military court martial system.