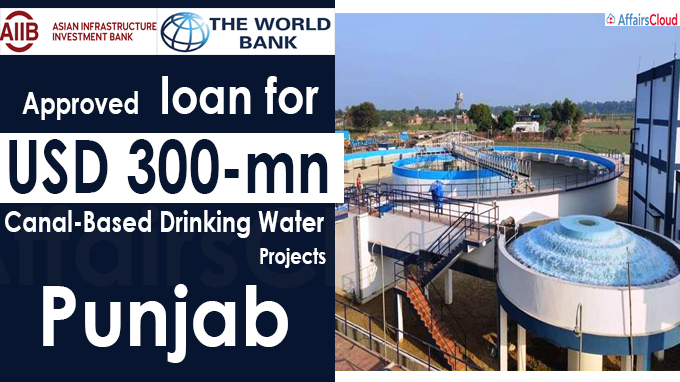 The World Bank(WB) and Asian Infrastructure Investment Bank (AIIB) have approved the loan for the 300 Million USD (around Rs.2190 crore) canal-based drinking water project in Punjab.

The entire project will be co-financed by International Bank for Reconstruction and Development (IBRD) of World Bank (USD 105 million), AIIB (USD 105 million) and the Government of Punjab (USD 90 million).

The $105 million loan from the International Bank for Reconstruction and Development (IBRD), has a final maturity of 12.5 years including a grace period of three years.

Aim of the Projects:

The canal-based drinking water projects in Punjab is Amritsar Project and Ludhiana Project.

ii.Under this project, The water treatment plant with a capacity of 440 million litres per day (MLD) will be constructed in the village of Vallah in Amritsar.

iii.After the treatment the clear water will be pumped to the Over Head Service Reservoirs (OHSR) which will enable a continuous water supply to the residents of the city.

iv.The infrastructure of the project is designed to fulfil the water demands for 30 years.

ii.Under this project 580 MLD water treatment plant will be constructed for treating the surface water and the treated water will be pumped to the OHSR to meet the water supply needs of the residents.

On September 7, 2020, The State Government of Himachal Pradesh (HP) and World Bank signed an $82 million (approximately Rs. 600 Crores) loan deal to strengthen its transport and road safety institutions by improving the condition, safety, resilience, and engineering standards of the state’s road network.