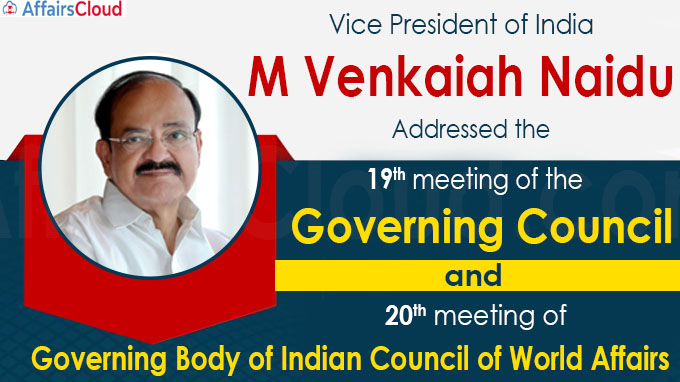 Established in 1943, ICWA was India’s 1st Independent International Affairs think tank. While the Vice President of India is its Ex-Officio President, the Minister of External Affairs is its Vice President.

Key Takeaways from the Address

iii.He also highlighted the decisions of the concerned ICWA Committees to set up a Shanghai Cooperation Organization (SCO) Study Centre and a Council for Security Cooperation in the Asia-Pacific (CSCAP) Coordination Centre within the Council to boost ICWA’s work related to multilateral forums.

iv.ICWA Committees have also set up an ‘ICWA Archives Unit’ to catalogue and conserve historical and archival records.

v.VP commended ICWA for commissioning a short monograph (a specialist work of writing or exhibition on a single subject) on India’s bilateral relations with Bangladesh.

Vijay Thakur Singh appointed as next DG of ICWA

Former Secretary (East), Ministry of External Affairs, Vijay Thakur Singh was appointed as the next Director General of ICWA. The term of Dr. TCA Raghavan is set to come to an end on 23 July 2021.

On 17th November 2020, Indian School of Business (ISB), signed an MoU with ICWA to enable collaborative research in the areas of international relations and to promote cooperation between India and global partners on various issues.