BJP-led National Democratic Alliance nominee and former Union Minister, M Venkaiah Naidu has been elected as the 13th Vice President of India. He will take oath as new Vice-President of India on August 11, 2017 and will thereby become the ex-officio Chairman of the Rajya Sabha.

Over 98% poll percentage was recorded in the Vice-Presidential election 2017.

Born to a humble agricultural family in Nellore district of Andhra Pradesh, 68-year-old Naidu was interested in politics since his childhood and joined Akhil Bharatiya Vidyarthi Parishad (ABVP) in 1973. 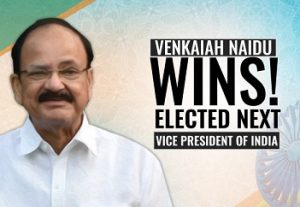