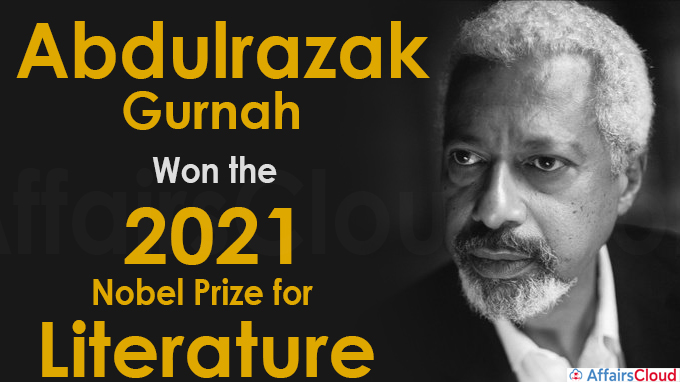 The Royal Swedish Academy of Sciences awarded the 2021 Nobel Prize in Literature to Abdulrazak Gurnah, a Tanzanian novelist based in the United Kingdom for his works on the effects of colonialism and fate of the refugee in the gulf between cultures and continents.

i.Abdulrazak Gurnah, born in 1948 in Zanzibar, Tanzania, is serving as a professor at the University of Kent, Canterbury, England.

ii.He is also the associate editor of the journal Wasafiri.

iii.He published his debut novel titled “Memory of Departure” in 1987.

The 2020 Nobel Prize in Literature was presented to American poet Louise Glück for her unmistakable poetic voice that with austere beauty makes individual existence universal.

About Nobel Prize in Literature:

iv.At the age of 41, Rudyard Kipling won the prize in 1907 and became the youngest literature laureate.

i.The Nobel Prize can be shared by up to 3 individuals and in the case of the Nobel Peace Prize, it can also be awarded to an organisation.

ii.Since 1974, the Prize cannot be awarded posthumously, if the recipient dies after the announcement of the prize, the prize can still be awarded to them.