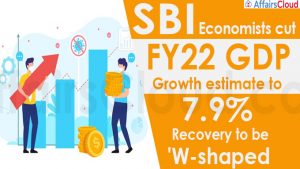 On June 01, 2021, State Bank of India (SBI) economists reduced India’s FY22 GDP growth estimates to 7.9 percent (the lowest among all analysts) from their earlier projection of 10.4 percent.

ii.They have also estimated a real GDP growth of Rs 145.8 trillion in FY22 with a “W-shaped” recovery (earlier anticipated “V-shaped”).

W-shaped recovery – It is also known as a double-dip recession, in which the economy falls into recession, recovers with a short period of growth, then immediately falls back into another recession before finally recovering.

Note – The Reserve Bank of India(RBI) till maintains its growth estimate at 10.5 percent

Moody’s, the US-based rating agency, expects a decline in Indian economic activity in the Q1 FY22(April-June quarter), followed by a rebound, resulting in real, inflation-adjusted GDP growth of 9.3 percent in FY22 (earlier projection – 13.7 percent) and 7.9 percent in FY23.

i.It gave ‘Baa3’ rating for India with a negative outlook due to the weak financial system under COVID1-19.

ii.It reported the Indian government’s debt burden to rise by 90.3 percent and a fiscal deficit of 11.8 percent of GDP in FY22.

iii.It also stated the Debt-to-GDP to be at 92 percent by FY23, due to slow economic growth.

SBI’s research report ‘Ecowrap’ stated India’s Real gross domestic product (GDP) growth for Q1 FY22 to be in the range of 10-15 percent as against RBI’s forecast of 26.2 percent. It also forecasted Real GDP loss in the range of Rs 4-4.5 lakh crore for Q1 FY22.