President Ram Nath Kovind was on a visit of Bolivia from 28th to 30th March, 2019. He reached Santa Cruz, Bolivia on the second leg of his three nation visit to Croatia, Bolivia and Chile. This is the first visit by an Indian President to Bolivia. 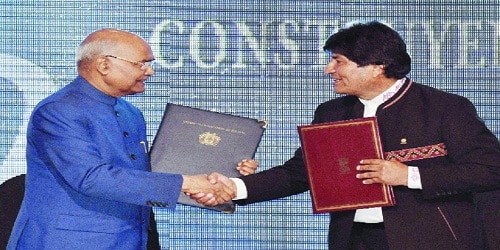 India offered US $100 Million to Bolivia for Financial development

During Ram Nath Kovind’s visit to Bolivia, India and Bolivia have signed 8 MoUs. These MoUs were signed in the fields of culture, mining, Visa waiver arrangement for diplomats, the exchange between diplomatic academies, space, traditional medicine, establishment of Centre of Excellence in IT and Bi-Oceanic Railway project.

A Plaque of Mahatma Gandhi Hall was inaugurated by the President of India, Shri Ram Nath Kovind at the Gabriel Rene Moreno University in Santa Cruz.

On 29th March 2019, Ram Nath Kovind met his Bolivian Counterpart Evo Morales Ayma and discussed issues of mutual interest and cooperation. Both the countries denounce terrorism and ensure that necessary steps will be taken to weed out terrorism.