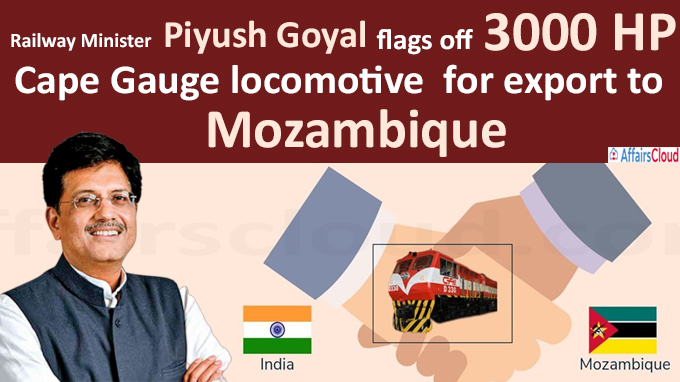 Target- India Planned to become a net-zero Railway & power our entire electricity requirements by renewable energy by 2030. India is set to become the first large railway in the world to become 100% electric traction driven.

Background:
This export is part of BLW’s order received from Mozambique on January, 2020 for 3000 HP cape gauge locomotive and 90 stainless steel passenger coaches to Mozambique. This contract will enhance the Indian Government’s Motto, Make-in-India & Atmanirbhar Bharat.

Objective – This export will boost the Indo-African relationship.

i.2 locomotivs were completed within 14 months after getting confirmed order in January 2020.

i.Design -This Loco has a Cape Gauge Bogie with maximum axle load of 20 ton and capable for 100 km/h speed.

ii.Transporting Capacity – It has capacity of 2255 ton at 100 kmph at level track and maximum tractive effort of 400N.