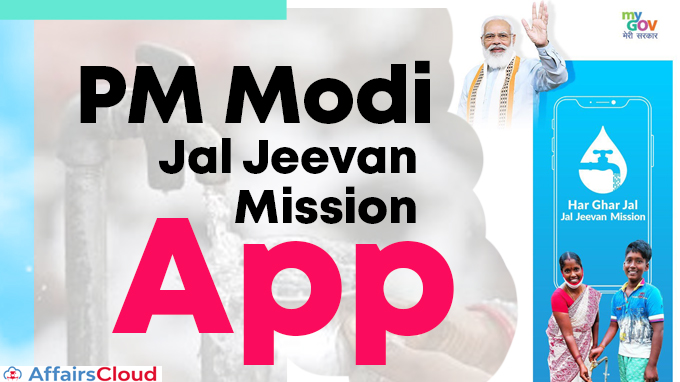 In October 2021, Prime Minister (PM) Narendra Modi virtually launched the Jal Jeevan Mission (JJM) mobile application to create awareness about the JJM and to improve the transparency and accountability of schemes under the JJM.

i.The JJM mobile app will contain information about the JJM such as the number of households that received water, quality of water, etc.

ii.Since August 2019, JJM is under implementation in partnership with States with an outlay of Rs 3.60 Lakh Crore.

iii.In August 2021, as per 15th Finance Commission recommendations Rs 1.42 Lakh Crore was allocated to Panchayat Raj Institutions (PRIs) as a tied grant for water & sanitation during FY22 to FY26.

It is a mission launched on August 15, 2019, to provide safe and adequate drinking water through individual Functional Household Tap Connection (FHTC) by 2024 to all households in rural India.

i.Goa, Telangana, Andaman and Nicobar Islands, Puducherry, Dadra and Nagar Haveli and Daman and Diu, Haryana were the States/Union Territories that have 100 percent FHTC.

ii.Through JJM water is reaching every household in about 1.25 lakh villages in about 80 districts of India. To date, around 772,000 schools and 748,000 Anganwadi centres have been provided tap water supply.

iv.In the aspirational districts, the number of tap connections has increased from 31 lakhs to 1.16 crore.

Note – Aspirational Districts are those districts in India, that are affected by poor socio-economic indicators.

On 22nd March 2021, the World Water Day, the Government of Denmark and the United Nations Office for Project Services (UNOPS) entered into a partnership to provide strategic technical support for implementing Jal Jeevan Mission (JJM) in Uttar Pradesh.