Emmanuel“Manny” Dapidran Pacquiao is a Filipino professional boxer and politician, currently serving as Senator of the Philippines.

Pacquiao, 59-6 with two drawn and 38 knockouts, showed he still has a lot left in the tank but he failed to get the knockout victory that has eluded him for the past seven years. 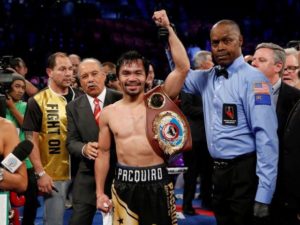