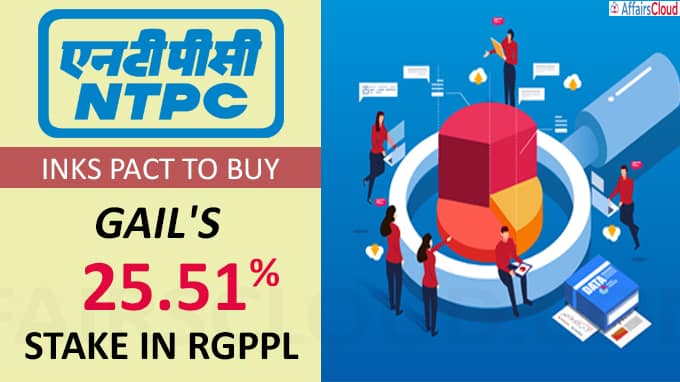 On February 23, 2021 NTPC Ltd(formerly- National Thermal Power Corporation Limited) signed a share purchase agreement with  GAIL (India) Ltd. As per the agreement NTPC will buy  GAIL’s 25.51%  in Ratnagiri Gas and Power Pvt Ltd (RGPPL), which is commonly known as Dabhol project. Apart from this, NTPC will sell its 14.82% stake  in Konkan LNG Ltd (KLL) on a fully diluted basis to GAIL.

After the transaction,  NTPC’s shareholding in RGPPL will stand at 86.49%. In addition to this, NTPC will exit from KLL.

ii.It is promoted by NTPC Limited and GAIL (India) Limited.

iii.It was established to  takeover and revive the assets of Dabhol Power Company Project.

iv.It is to be noted that RGPPL owns an Integrated Power generation and Re-gasified LNG facility. v.The power station is one of India’s large gas based combined cycle power stations.

ii.It was incorporated as a wholly owned subsidiary of RGPPL.

iii.It was formed to own the  LNG assets at Ratnagiri after a demerger scheme for RGPPL was approved by the National Company Law Appellate Tribunal (NCLAT) in February 2018.

On May 23, 2020 ITC Limited entered into a Share Purchase Agreement(SPA) to acquire 100% of the equity share capital of Sunrise Foods Private Ltd(SFPL), which is primarily engaged in spices under the trademark ‘Sunrise’. The value of the deal is not disclosed but expects to be around Rs 1,800 crores to Rs 2,000 crores.